View the full Dancer From The Dance Festival programme here.

John Scott’s Irish Modern Dance Theatre [IMDT] reboots the company’s annual Dancer From The Dance: Festival of Irish Choreography back to a live setting, gathering the best International and Irish choreographers, teachers, performers, filmmakers in dance, to celebrate all that identifies ‘Irishness’ through the medium of dance.

Ruaidhri Maguire in After/Before
After/Before is an exploration of the definitions of abandonment. The piece explores this word and the three definitions associated with it; the act of leaving permanently and completely, permanently setting aside one’s principles, and the act of giving up control to one’s impulses or to an external force.

Siamsa Tire with Jonathan Kelliher and Jimmy Hickey in Footsteps
Footsteps is a tribute to this Dance Master tradition of North Kerry, paying homage to those who came before us, who dedicated their lives to protecting, sustaining, and developing this unique form of traditional step dance.

Mary Nunan in Slant
Slant is not intended to have any meaning. It has a structure and improvised content which is activated by a woman who slips between modes of speaking and moving. Maybe some kind of truth. A truth with no meaning. That’s what she’s after.

Tobi Balogun in Ara – body politics
Ara: Reflections on Race, Masculinity, Mental Health, and Social Structures. Shifting perspectives on how we’re viewed/view ourselves. Not as Black, but human. Explores masculinity and vulnerability through expression of displacement.

Jessie Keenan’s Fragments (film)
Fragments examines the imperfect nature of memory and the instability of its
fragile reconstruction. With this work, Keenan asks the question: what can we hold on to as our memories alter or even disappear completely?

Luke Murphy’s Written on Skin (film)
Written on Skin is a short film created in collaboration with filmmaker and photographer Patricio Cassinoni exploring and reflecting the work of the Renaissance Skin Project. 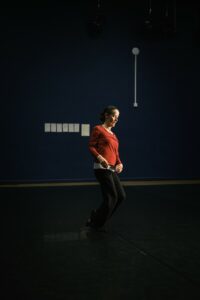 “Launched in 2019, Scott’s personal crusade to promote Irish choreographers on the global stage began as a labour of love to challenge limiting, confused, and often negative notions about Irish choreography and identity… the festival’s growth over the past three years has been staggering… Scott’s determination has this year’s festival shining a light on some of our finest choreographers, and dance film makers, positioned as part of a global practice and historic tradition, commanding form and space with the very best. [The Festival suggests] “that Irish choreography, like being Irish, like dance itself, and dance on film, is everything you thought it was and everything you thought it wasn’t. And lots in between you never thought possible or never thought of at all. Shaping identity, and dance, well into the future.” Chris O’Rourke, The Arts Review, July 2021

Exhibitions / Publication Launch / 26 Nov 2022 Free
Please join us in Project Arts Centre for a publication launch and a drink, to cap off the seminar event ...
Read More

/ 30 Nov 2022 - 01 May 2023 Free, Ticketed Online via Zoom
After the successful run of our first series of free online SkĒNOGRAPHIA Masterclasses, talks and upskilling workshops, engaging with the ...
Read More

An Evening With A Girl – Khanyisile Mbukwane