Soon (In 45 Years’ Time) / Gan Mhoill (I gCionn 45 Bliain) is an exhibition that continues to triangulate a position for Project Visual Arts, in this instance through considering its location, spatially and temporally, with reference to one of its closest neighbours: the radical bookshop, Connolly Books. The name is adapted from a short story by Alexandra Kollontai, a work of speculative fiction in which an older woman reflects on her life and on events that have led to the not-too-distant utopian society in which she lives.

Colin Darke and Ruth Ewan were invited to respond to our 45 years of adjacency within the locality of Temple Bar, thinking of the continuities and discontinuities between these two spaces; the ideas that are reflected, refracted or otherwise circulate between them; and to consider their social and civic functions. Themes around time – with reference to labour and value, pre-revolutionary and post-revolutionary moments, and alternative ways of figuring time – run through the exhibition, which also includes artist-selected works (Livia Kojo Alour selected by Ruth Ewan) and some made through collaborative/delegated processes (Hilary Morton and Mary Kervick with Colin Darke). 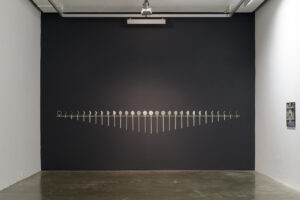 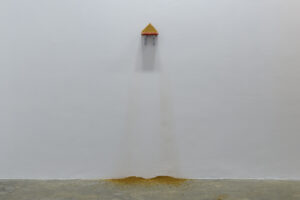 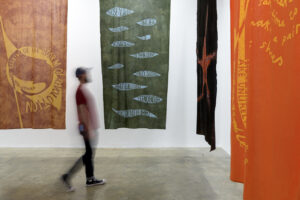 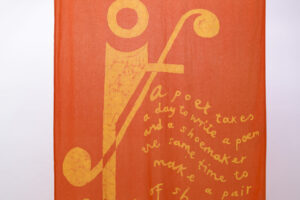 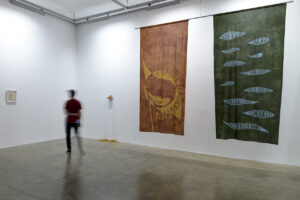 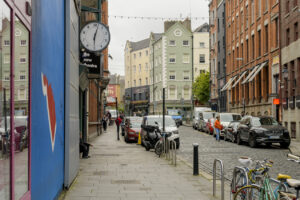 Please do not hesitate to contact us at access@projectartscentre.ie or call 01 8819 613. You can find the latest information about Project’s accessibility here.

Colin Darke was born in 1957 and grew up in Surrey in the south of England. He moved to London in 1977 to study Fine Art at Goldsmiths College and relocated to the north of Ireland in 1988, living in Derry for twenty years and in Belfast since 2008. He completed his PhD at the University of Ulster in 2010.

His work has been mostly text-based since around 1990, originally derived from “comms” – republican prisoners’ letters, written in small writing onto cigarette papers for smuggling out of gaol. His wall pieces, consisting of text and images, were made in response to Marx’s writings on base and superstructure.

The largest text piece is Capital (2000-2003), consisting of the three volumes of Marx’s magnum opus written by hand onto 480 two-dimensional readymade objects. As a result of considering the nature of the readymade from a Marxist economic perspective, he made a follow-up piece, The Capital Paintings (2004-2007), which equalised the commodities used in Capital through making an oil painting of each of the 480 objects used.

Later work responded to historical moments, particularly to the Paris Commune of 1871. Many of these works reference Gustave Courbet’s still-life paintings of fruit made during his imprisonment for his part in the Commune, his rotting apples acting as metaphors for the Communards killed in the massacre of Bloody Week.

In recent years he has been making work which refers to the labour theory of value, consisting of timed drawings and paintings and short animations which contain the artist’s specified contributions to the total labour-time consumed in their production.

Ruth Ewan is an artist based in Glasgow. Her work addresses ideas of power and questions representations of time, rebellion, and repression. Her work grows from context-specific research resulting in a wide variety of forms including events, public works, performance, writing, large-scale installations, and print.

She has taught at numerous art schools and universities and created workshops with museums and galleries, primary and secondary schools, women’s groups, community organisations, hospitals and prisons.

Her work is in the collection of Tate London, McManus Galleries Dundee, Museum of Modern Art Warsaw, FRAC Champagne Ardenne, The Scottish Parliament and CAAC Seville.

She is represented by Rob Tufnell, Cologne / Venice.

Livia Kojo Alour (formerly known as MisSa Blue) is a variety star, international recognised sword swallower, vocalist, poet and exhibited artist. Her work stretches from Theatre over Live Art to Circus. Livia is one of only 4 black sword swallowers worldwide, was voted ‘Most Influential Performer in Europe 2018’ and was the first sword swallower to perform at the Burlesque Hall of Fame in Las Vegas.

Mary Kervick is a visual artist based in Dublin. Working predominantly in drawing and painting, her work is preoccupied with issues of categorisation, classification, and the attendant result in the order of the world. In 2022 Mary was awarded the Arts Council Agility Award. She is currently a studio artist in Ormond Studios.

_
Hilary Morton is an activist and artist based in Ireland and Britain.