Please Note: Bookings are every 1hr30mins; this is to allow you to enjoy the full programme. Some people will stay for a shorter time, so we encourage you to call in and check availability even if you have not booked in advance. You can always give us a call at box office to check.

Full schedule of films below.

Please Note: Some of the films contain flashing lights and scenes of nudity

Luminous Void: Twenty Years of Experimental Film Society is an overview of the twenty-year history of Experimental Film Society (EFS). Through an exhibition and event series, it will explore the unique, defiant and influential trail that EFS has blazed through the landscape of contemporary Irish moving image. Hailed as “the most active, prolific and intrepid group of experimental filmmakers working in Ireland today” (aemi), EFS is a company dedicated to the production and distribution of personal, formally challenging experimental cinema. But it is also much more than that. It is an attitude, an aesthetic and a stubbornly independent way of operating in complete freedom at the margins of film culture and at the outer limits of cinematic creativity.

EFS cinema rejects mainstream conventions of filmmaking and instead adopts an exploratory, experiential approach that foregrounds mood, atmosphere, visual rhythms, and the sensory interplay of sound and image. Often uncanny and unsettling, EFS work is deeply engaged with film history while constantly investigating the visionary potential of every manner of moving image device. EFS conjures an alien, outsider vision of the world capable of both alienating and renewing perception. And its conception of ‘cinema’ is restlessly multidisciplinary, encompassing installation, performance and sound projects as well as theoretical writing.

EFS was founded in Tehran in 2000 as a collective by filmmaker Rouzbeh Rashidi who remains its director and guiding force. It moved to Ireland with him in 2004 and transitioned to being a production company in 2017 while remaining true to its radical core values and continuing to work with many artists long associated with it. Along the way, it has produced several dozen feature films and over five hundred shorts while consecutively forging underground film cultures in both Iran and Ireland that would have been unthinkable before it came along. Luminous Void will showcase the artists currently working under its banner: Rashidi, Atoosa Pour Hosseini, Maximilian Le Cain, Vicky Langan, Michael Higgins, Jann Clavadetscher, Chris O’Neill and Shelly Kamiel.

Luminous Void will feature an installation encapsulating the EFS aesthetic and its unworldly atmosphere. This will give form to the ‘luminous void’ at the heart of the EFS conception of cinema. In parallel with this, there will be an ongoing and constantly changing programme of short and feature length EFS films projected on loop.

A series of special events will accompany the exhibition. Three guest curators, Matt Packer, Pluck Projects and Nikola Gocić, will curate and present themed programmes of EFS films. These programmes will be screened via an online platform during the exhibition.

Due to ongoing Covid-19 restrictions, the remaining events will take place in late 2021. These include live performances by Atoosa Pour Hosseini and Vicky Langan/Maximilian Le Cain specially devised for Luminous Void. Pour Hosseini and Langan/Le Cain are EFS filmmakers whose work also encompasses a performance practice. There will also be two talk events, one a performative lecture by Le Cain and the other a panel discussion featuring all current EFS filmmakers.

Luminous Void: Twenty Years of Experimental Film Society also resulted in a book of that title that was launched in late 2020. Featuring contributions by noted critics and curators from across the globe, it examines the ideas and impulses that animate EFS as well as the practices of many of the filmmakers associated with it. It includes texts by Adrian Martin, Nadin Mai, Matt Packer, Pluck Projects, Sebastian Wiedemann, Sarah Hayden & Paul Hegarty, Azadeh Jafari, Vahid Mortazavi, Zulfikar Filandra and expert EFS scholar Nikola Gocić. These writings provide a guidebook to the imposingly vast ‘luminous void’ of Experimental Film Society cinema. The book will be available for purchase at Project Arts Centre during the exhibition or can be ordered at experimentalfilmsociety.com 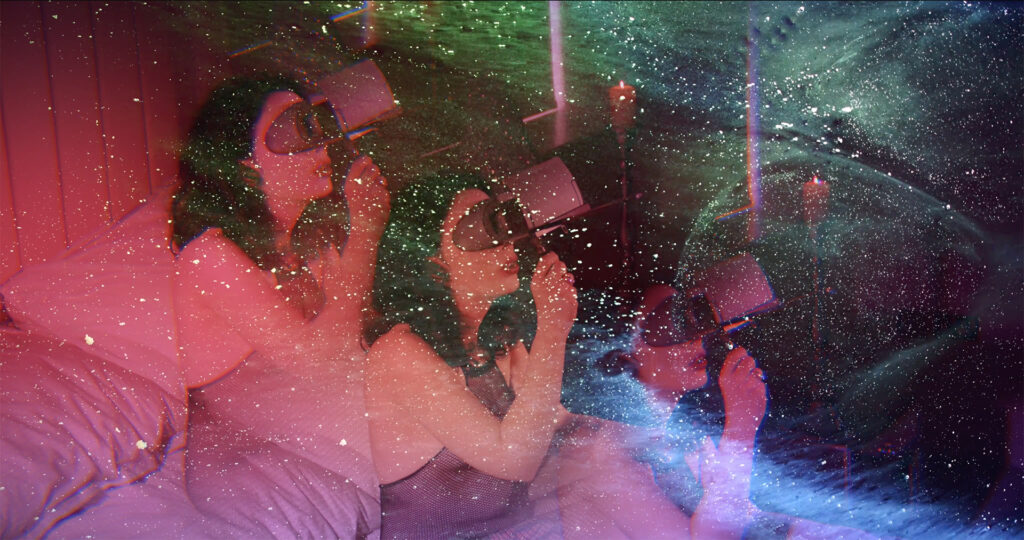 Please do not hesitate to contact us at access@projectartscentre.ie or call 01 8819 613 . You can find the latest information about Project’s accessibility here.

All works were funded by the Arts Council of Ireland.

All images are courtesy of the artists and EFS.

Rouzbeh Rashidi is an Iranian-Irish filmmaker. He has been making films since 2000, at which time he founded the Experimental Film Society in Tehran. He has always worked entirely away from mainstream conceptions of filmmaking, striving to escape the stereotypes of conventional storytelling. Instead, he roots his cinematic style in a poetic interaction of image and sound. He generally eschews scriptwriting, seeing the process of making moving images as exploration rather than illustration. His work is deeply engaged with film history. Rashidi moved to Ireland in 2004 and currently lives and works in Dublin.

Atoosa Pour Hosseini is a Dublin-based visual artist, filmmaker, member of Temple Bar Gallery + Studios, and co-director of Experimental Film Society. Her work is influenced by historical avant-garde cinema, and explores questions about illusion, reality, and perception through the media of film, performance, and installation. She has shown her work extensively and won numerous awards nationally and internationally.

Maximilian Le Cain is an internationally recognised experimental film artist whose prolific practice explores a personal relationship with cinema as a site of haunting He is closely associated with EFS and frequently works in partnership with Vicky Langan. Their feature film Inside (2017) was recently acquired for The Arts Council Collection.

Michael Higgins is a filmmaker best known for his analogue film work. He is interested in using the filmmaking process to rupture the reality of the everyday, skewing documentary and fiction in order to highlight alternative ways of seeing and experiencing. He has a dog named Tinto.

Jann Clavadetscher is a Swiss-Irish visual artist/filmmaker who became part of EFS in 2005. He holds an MFA in Media Arts from NCAD and a Bachelor of Arts in Media Arts from Zurich University of the Arts. His practice includes installation, performance, short film and feature film projects all conceived within the context of an idea of cinema.

Chris O’Neill is an Irish filmmaker/video artist currently based in Cork City, Ireland. He specialises in using experimental techniques within a variety of genres to achieve a dramatic and intimate effect. Besides filmmaking O’Neill also curates for cinema and festivals, and has written for film-related publications.

Shelly Kamiel is a New York based filmmaker. Her cinema conjures an intimate neon shamanism that invites viewers into an intense personal vision that is as unsettling as it is visually enticing. She is currently in post-production on her first feature, Ghost Dust.

Matt Packer is Director / CEO of EVA International – Ireland’s Biennial of Contemporary Art. Previous roles include Director, CCA Centre For Contemporary Art Derry ~ Londonderry (2014 – 2017); and Associate Director, Treignac Projet (2013-2016). In an independent capacity, he curated numerous exhibitions and projects including: They Call Us The Screamers, TULCA Festival of Visual Arts, Galway (2017); and Disappearing Acts, Lofoten International Art Festival, Norway (2015) (with Arne Skaug Olsen). He was one of the international mentors on the What Could / Should Curating Do programme in Belgrade (2018, 2019), and has also written for numerous magazines, journals including Frieze, Kaleidoscope, and Concreta.

Nikola Gocić is an architect by profession and a film reviewer, comic and collage artist by passion. He is the author of NGboo Art blog, co-curator of Kinoskop, an international festival of analogue experimental cinema and audio-visual performance, and a frequent collaborator of Experimental Film Society.

Adrian Martin is an Australian-born film critic and audiovisual artist based in Spain. His most recent book is Mysteries of Cinema (University of Western Australia Publishing, 2020), and he regularly appears as an audio commentator for BFI, Arrow, Indicator & Masters of Cinema DVD/Blu-ray releases.

Nadin Mai is a writer and festival programmer for Slow Film Festival. Her work has been published on several platforms, such as photogénie, Multiplot! and Lo Specchio Scuro. She runs The Art(s) of Slow Cinema blog and is currently working on two monographs on Slow Cinema. She is based in France.

Sebastian Wiedemann is a Colombian experimental filmmaker. He has shown his films at galleries and festivals internationally. He lives in São Paulo, where he is researching the intersection of experimental cinema, philosophy and anthropology for the Doctorate in Education at Unicamp-Universidade Estadual de Campinas.

Azadeh Jafari is an Iranian film writer, blogger, and translator based in Canada. She is a regular contributor to CinemaScope and TIFF (Toronto International Film Festival), and writes and translates for Filmkhaneh magazine.

Vahid Mortazavi is an Iranian film writer, blogger, translator and cinephile based in the USA. He is the co-founder of the film magazine Koker and one of the editors of Filmkhaneh magazine.

Zulfikar Filandra is a film and stage director, screenwriter and, more recently, a producer for the company Kolumbija based in Sarajevo. He graduated from Griffith College Dublin, the Academy of Performing Arts Sarajevo and studied at the Faculty of Electrical Engineering, Sarajevo. He is currently finishing his experimental feature debut Minotaur (an EFS / Kolumbija co-production initiated in May 2019).

The collaborative film “Luminous Void: Docudrama” was funded by the Arts Council of Ireland under the Open Call scheme.

The exhibition was funded by the Arts Council of Ireland Project Award (Visual Arts) and supported by the Dublin City Council.