Louise White is an award winning theatre-maker who has presented innovative audience experiences since 2009. She makes work for theatres and offsite venues: these have included black boxes, abandoned commercial units, psychiatric institutions and a decrepit Georgian mansion.

She has developed projects with dancers, culinary artists, composers, visual artists, opera singers, and children. She aims to cultivate original collective experiences that leave the audience with difficult questions about accountability and the fragility of the human condition.

Her recent works include This is the Funeral of Your Life (2017-18); A play about death through the challenges of living and Mother You (2015); an ambitious large scale performance for a disused commercial building.

This is the Funeral of Your Life 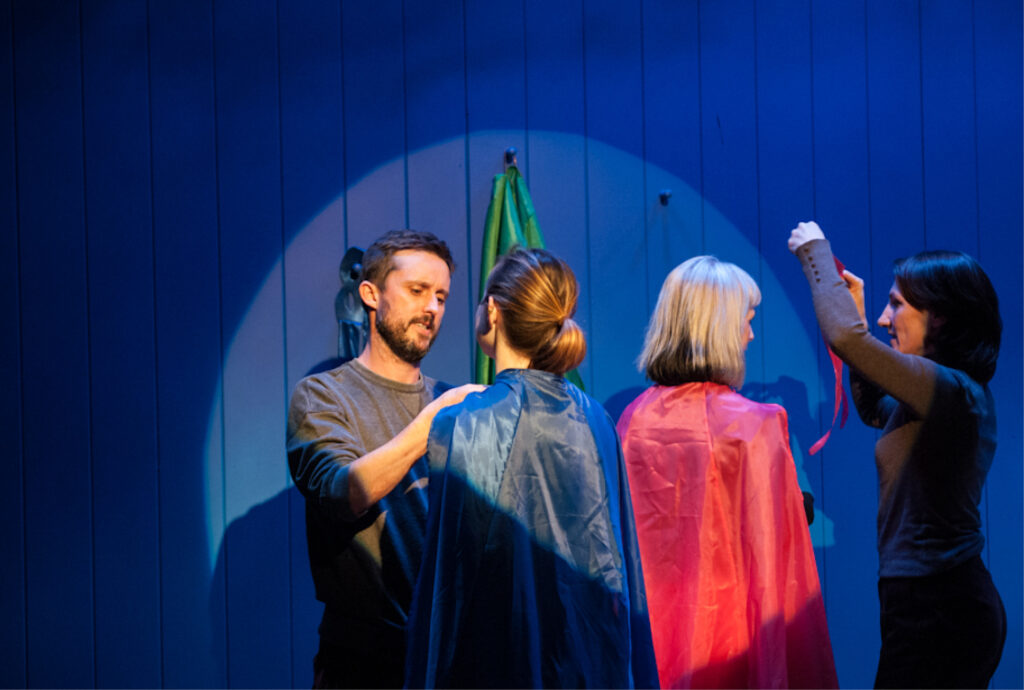 Leave behind the emails, the bills, the deadlines. The quest for recognition, fame and glory.

We are here. Together. Now.

Watch us facilitate your funeral in real time, in this live event featuring an actor, a dancer and a mezzo soprano.

Find out who you really are.
No really…You.
Right in front of you.
Like never before.
I mean we’re all dying anyway. 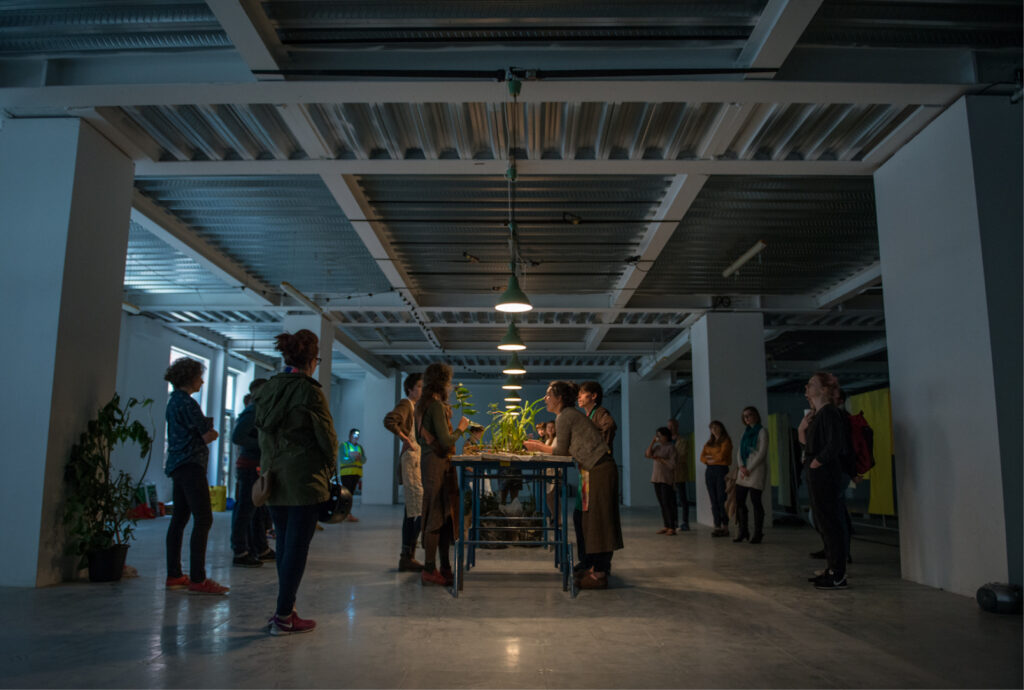 Mother You is an ambitious large scale performance for a disused commercial building which fuses performance, installation and video art to create a tender theatrical moment of activism and communion.

This work was developed with The Abbeyleix Bog Project, a small community in Laois who reclaimed a vast area of bogland from a semi-state body for their own recreational use. You get more information on their activities and on Abbeyleix Bog here.

Set in a disused warehouse and fusing live performance, installation, video art and ritual, the audience are invited to be guests of this strained community; to collectively witness action and to piece together fragments as the work unfolds. 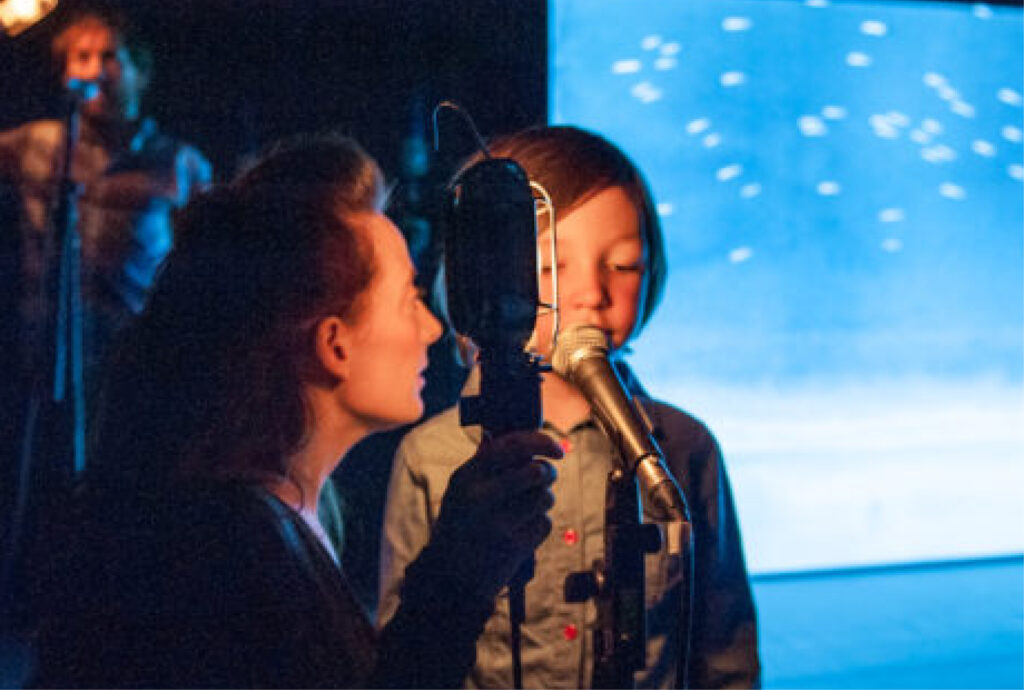 We have to find the way. To tell this. Our story. Together. For tomorrow and tomorrow and tomorrow. All of this has happened but it’s not who we are. All of this has happened and it’s just not us. So we have to do it. For a nation. For our heart and your heart and the heart of it all. For the children, for the flowers, for the buildings. This is an exciting collaboration between Louise White and painter Clare Henderson; where a dancer, 3 actors and a child imagine the way back from all this sadness.

All Things Considered It’s a Nice Place to Start 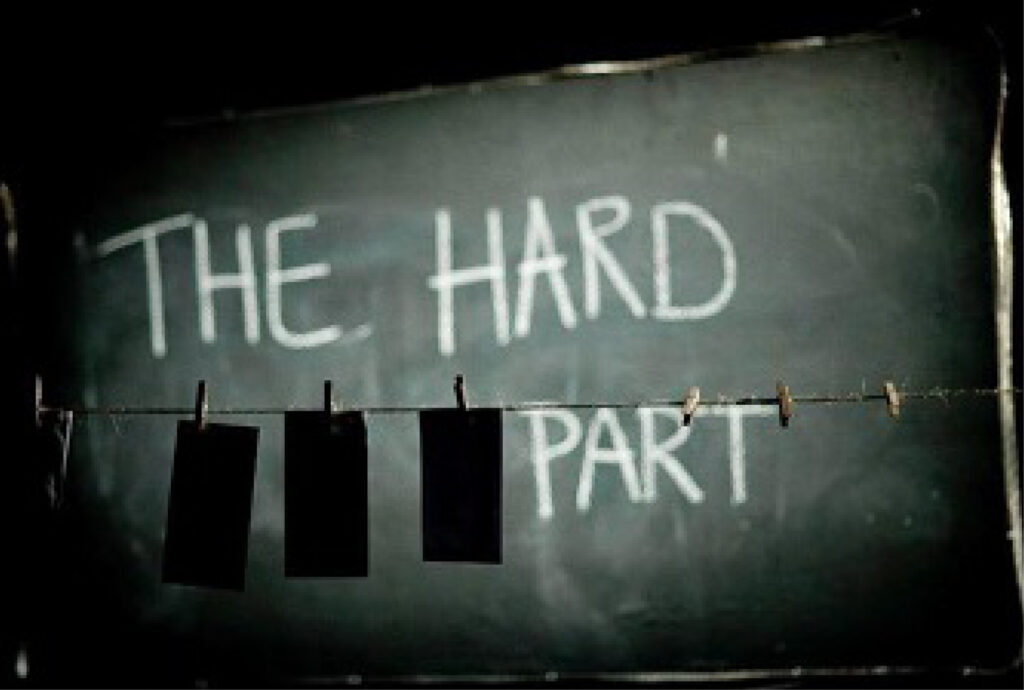 Myself and two other artists wrote thank-you letters to people that we didn’t know; a letter a day for one week to each of the 32 counties as well as 25 personal letters to friends and family members. We thanked individuals for small acts like holding the bus when we were running late, smiling hello when they passed on the street, for persevering and for being part of their communities. We explored the idea of engaging proactively and positively with strangers; what this meant and the complexities that arose from such a simple act. I developed and directed the performance for a theatre space based on our process and the reactions that we experienced.

Last month 300 strangers throughout the 32 counties received thank you cards from us. We wanted to reach out so we wrote to them. Because things were grim we were sad and we didn’t know what to do. We wanted to say thanks for letting us skip the queue that time, for being bright and different and needed and involved and for daring to be you. Writing these notes gave us hope and a reason to look up; made us think of fresh starts, new beginnings and a time for change. Now we are making a play about it and we want to share it with you. We want to change the world but we are only three. This could be a nice place to start. 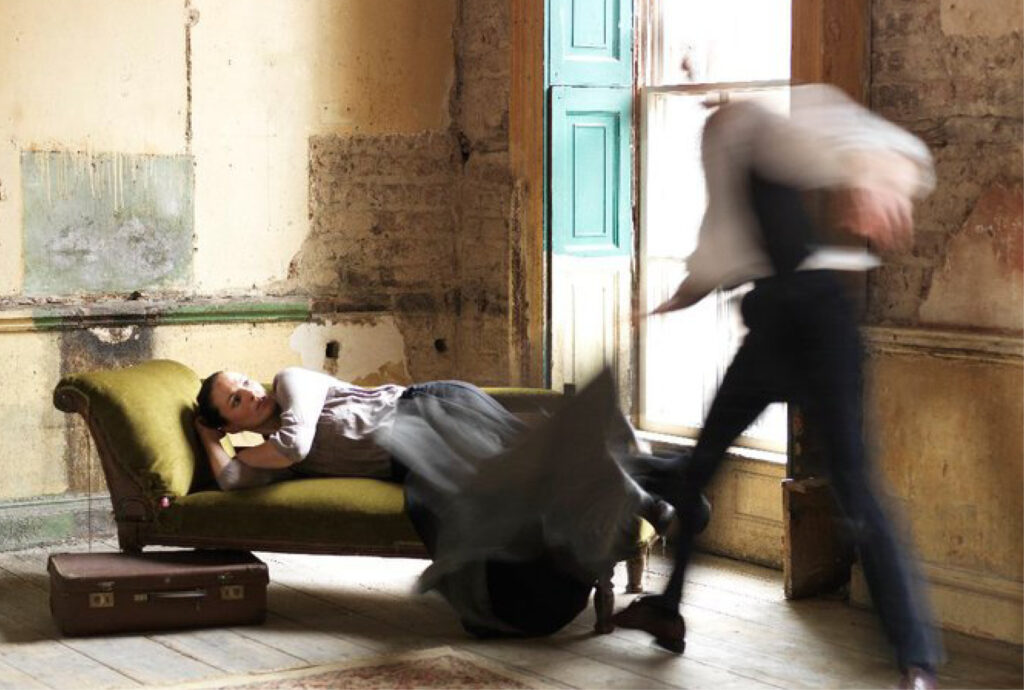 The audience were taken on a journey through performance and installation in a decrepit Georgian mansion; they were given small ‘performance gifts’ during the piece; these included stolen moments with individual performers sharing secrets, imparting small tokens or rubbing their palms with lavender balm. The performance ended with the audience gathered together in a room with a large dining table set with cups of tea, bread and jam for them to eat and drink together.

In devastation there is beauty. In all that is faded and worn something new must bloom. This  place is rare. It tells our story, it echoes those that have gone before. Look around you. There  are whispers of histories, adventures unfolding and secrets being shared. Experience our  search for redemption in this crumbling Georgian mansion. Pain brought us here but now we’re finding the way out. Come along, our arms are open.  What lies around the corner can only make us better. 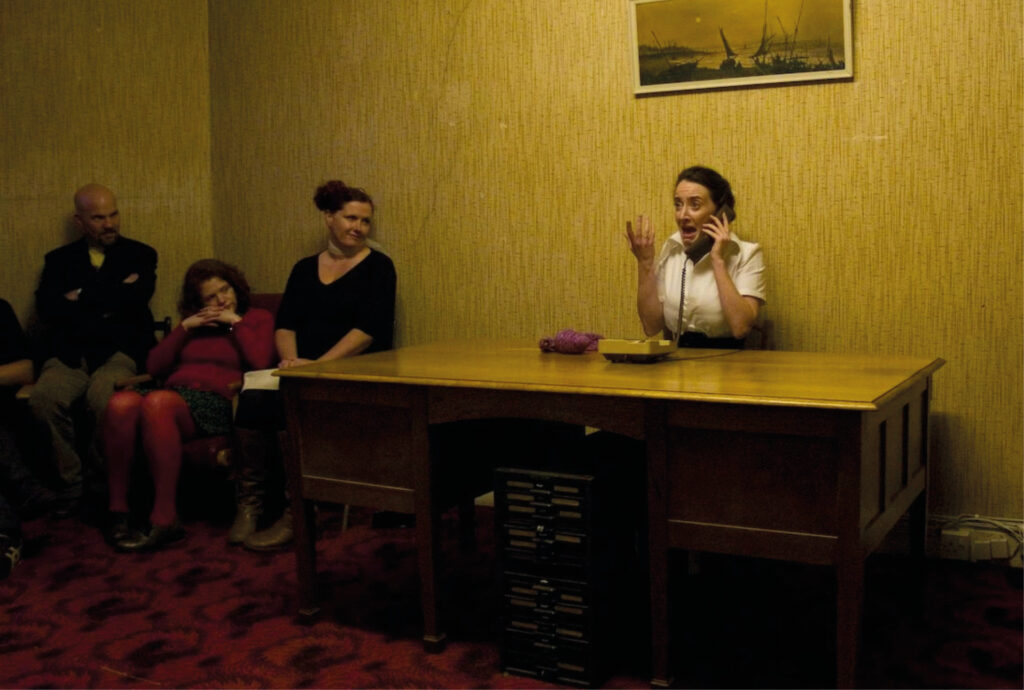 Here we made a site-responsive piece in four adjoining rooms in a disused part of the hospital’s annexe building. The work explored ideas of atonement and confession by the performers purging themselves of personal stories and possible case histories. The audience also spent time alone in an evocative incense filled confessional room, where they experienced four different types of reflective stations.

This is the Funeral of your Life
Project Arts Centre (2017)

From the Heart
Nominated for Best Off-Site Production, Best Design and the Spirit of The Fringe awards at Dublin Fringe Festival, 2010

This is the Funeral of your Life
‘An unexpectedly funny and uplifting play about your own death. This is elegant, dignified, skillfully put together by White and producer Joanna Crawley, and unexpectedly humorous.’
★★★★
Deirdre Falvey, The Irish Times, November 2017
​
‘Louise White’s eclectic exploration of mortality is ebullient and profound…White’s charming production – woven from personal grief – explores ideas of mortality.’
Chris McCormack, Exeunt Magazine, November 2017
​
‘This is a clever, funny show which engages the audience from the opening moments…Comical, moving and genuinely thought-provoking, This is the Funeral of Your Life captures the absurdity, devastation and humility of Final Farewell.’
Niall McArdle, 2paragraphs.com November 2017

Mother You
‘The scale of this event is one of the most fascinating things about it, and Louise White has moved on from her last Fringe event. It is a story that deals with community and realising what is important and worth fighting for…It is events like this that make the Fringe special. The vision, scope and creativity on display make it a charming event.’
Nomoreworkhorse.com, September 2015

‘The performance of Mother You has as much depth and as many layers as the bog in Abbeyleix… The understated yet beautifully authentic presentation by the cast of Mother You gently encourages us to remember our feelings from our first day at school, at college, at our workplace or at any of the thousands of community events hosted the length and breadth of Ireland. Cringe and fold up inside as the dynamics unfurl in the magical space, knowing full well that you are that person, you have asked that question and you have felt that feeling.’
David Staunton, Walkinniu.ie, September 2015

Way Back Home
★★★★
‘The form of her absorbing show follows its material, guided by a heartfelt sense of empathy for a direction-less society in search of new structures … White’s interest is something warmer: the hope and resilience necessary to find our way again.’
Peter Crawley, The Irish Times

★★★★
‘This mystifying piece merges visual and sound art, music, dance and theatre in a splendidly seamless fashion … When you put the pieces together, the bigger picture emerges. This is a play about, for one, the urge to fix things.’
Jennifer Lee, Irish Theatre Magazine

‘It captures the wildness and free-wheeling nature of a child’s view of the world and is playful and joyous. … This is a warm and feel good piece; that will leave you with a smile on your face when you leave the theatre.’
No More Workhorse

All Things Considered it’s a Nice Place to Start

With dance, mime, punning, ingenious use of washing lines and even a bit of a bounce on some mini-trampolines, the work is marked by appositely directed theatrical devices. It’s well-judged, tongue-in-cheek joviality that bigs-up the Irish everyman and it is delivered slickly by very experienced performers … All Things Considered… is warm, optimistic and spits (politely) in the face of doom and gloom.’
Matthew Harrison, Irish Theatre Magazine October 2011

‘A thoroughly heart-wrenching and spirit-lifting show … this production attempts to address the great dearth of goodwill and kindness that exists, at least publicly, in the current whirlpool of doom and gloom. The great catharsis of telling stories meets the impossibility of the selfless act, there was laughter and there were almost unexplainable tears too.’
Jeanette Farrell, Le Cool Dublin September 2011

‘It’s a neat and generous idea . . . intriguing and heart-warming, and sends an audience back out on to rainy lunchtime streets with smiles all round – mission accomplished..’
Laurence Mackin, The Irish Times September 2011

From the Heart
‘In affecting visual images … the uncanny atmosphere achieves a concrete, sensate effect, while the lavender scent of a young gentleman’s touch and the sweet sticky taste of blackberry jam lingers long after the short performance piece ends.’
Sara Keating, The Irish Times September 2010

‘Louise White and Kate Nic Chonaonaigh bring a sense of honest frailty to characters, willing us to see reality in fiction, lulling us to a state of intense discomfort.’
Kathy Clarke, Irish Theatre Magazine 2010

‘A combination of immersive experiences (lavender incense and candle-filled rooms) and dense literary monologues … the vignettes of past case-histories eventually provides the viewer with a visceral narrative focus … performers Kate Nic Chonaonaigh and Louise White seem to be evoking a time long past … An intriguing piece.’
Sara Keating, The Irish Times

Louise is developing a new work entitled ‘Privilege, The Musical!’. This is a searing and compassionate analysis of Ireland through story and song; a raucous exposition of the tensions that arise when telling the story of modern day Ireland.

She is researching and developing in 2018 and the work will premiere in late 2019.