Brokentalkers are a multi-award winning Dublin based theatre company, founded in 2001 by Feidlim Cannon and Gary Keegan after graduating from De Montfort University in Leicester. Brokentalkers have built a reputation as one of Ireland’s most innovative and original theatre companies making formally ambitious work that defies categorization.

Their working method is founded on a collaborative process that draws on the skills and experiences of a large and diverse group of contributors from different disciplines and backgrounds. Some are professional artists, performers, designers and writers and others are people who do not usually work in the theatre but who bring an authenticity to the work that is compelling.

Brokentalkers make work that responds to the contemporary world, using elements such as original writing, dance, classic texts, film, interviews, found materials and music to represent that world in performance. 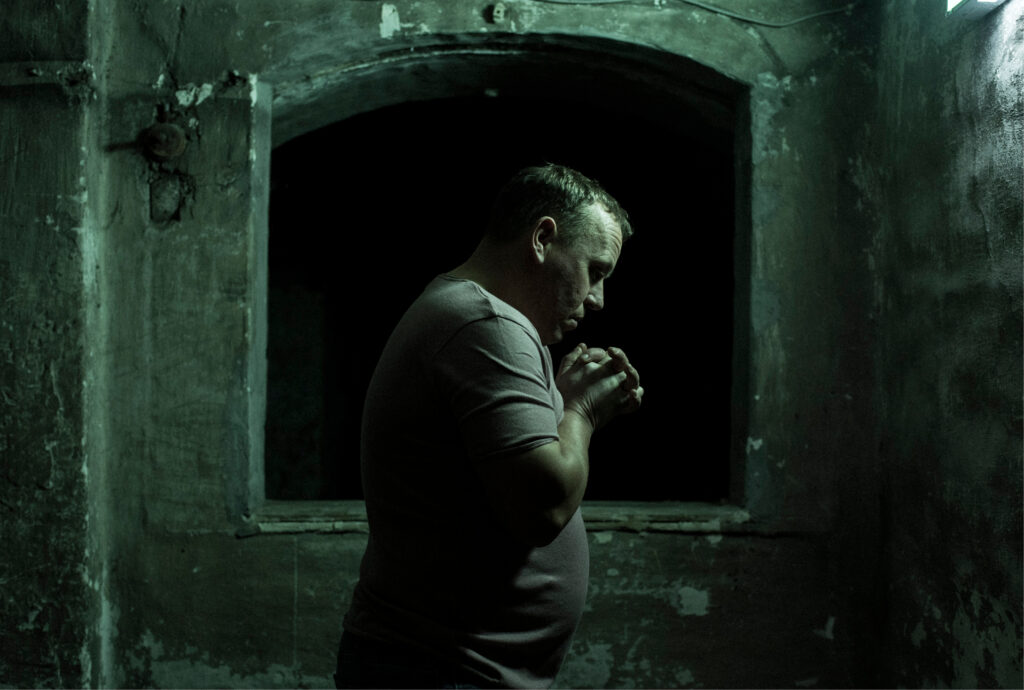 A documentary performance work exploring mental health and human rights in the prison system in the UK and Ireland. Based on historical research and interviews with current life-sentence serving prisoners and performed by stand-up comedian and former prisoner Willie White.

With their distinctive blend of biography, socio-political discourse and breathtaking theatricality, this new show from leading contemporary theatremakers Brokentalkers gives voice to a section of society often ignored.

The Examination is a collaboration with Professor Catherine Cox, as part of the Wellcome Trust Award for Prisoners, Medical Care and Entitlement to Health in England and Ireland, 1850-2000 and is supported by UCD Research. Originally commissioned by UCD School of History. 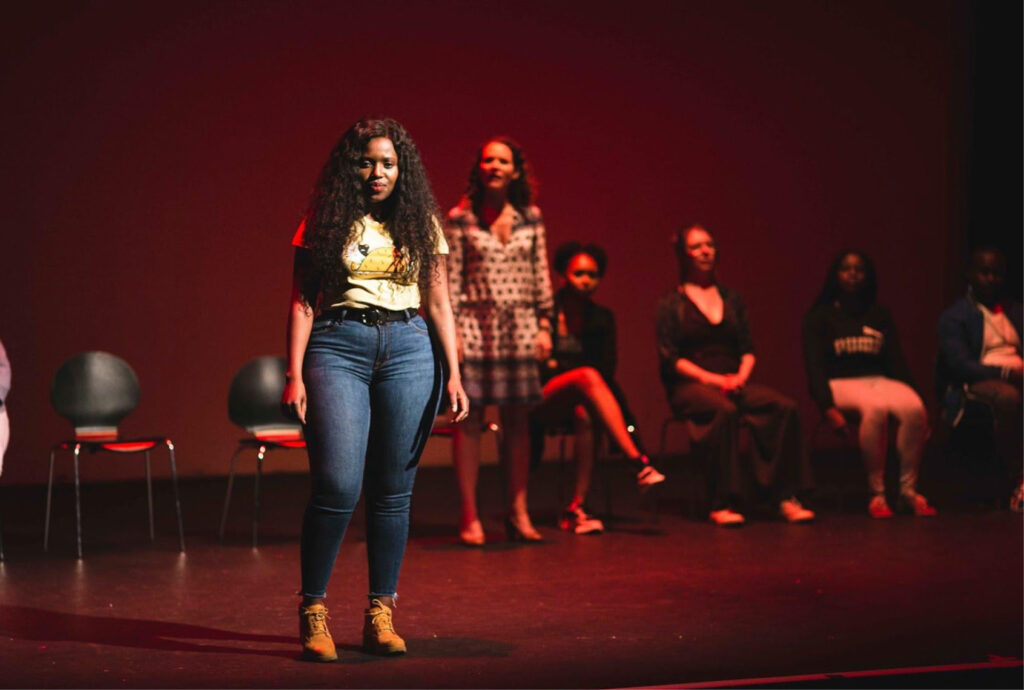 A theatre performance devised with and performed by residents of Globe House direct provision centre in Sligo. Performed as part of Cairde Sligo Arts Festival, in collaboration with Hawk’s Well Theatre.

Based on the cast’s personal experiences, Uprooted explores the experiences of new communities. The piece explores in a darkly comic way the notion of acceptability and how newcomers to land can experience varying degrees of acceptance depending on where they have come from and how they assimilate to a new culture by abandoning their own. Taking the form of a competition to decide who is acceptable, Uprooted explores prejudices and asks what we are afraid of. 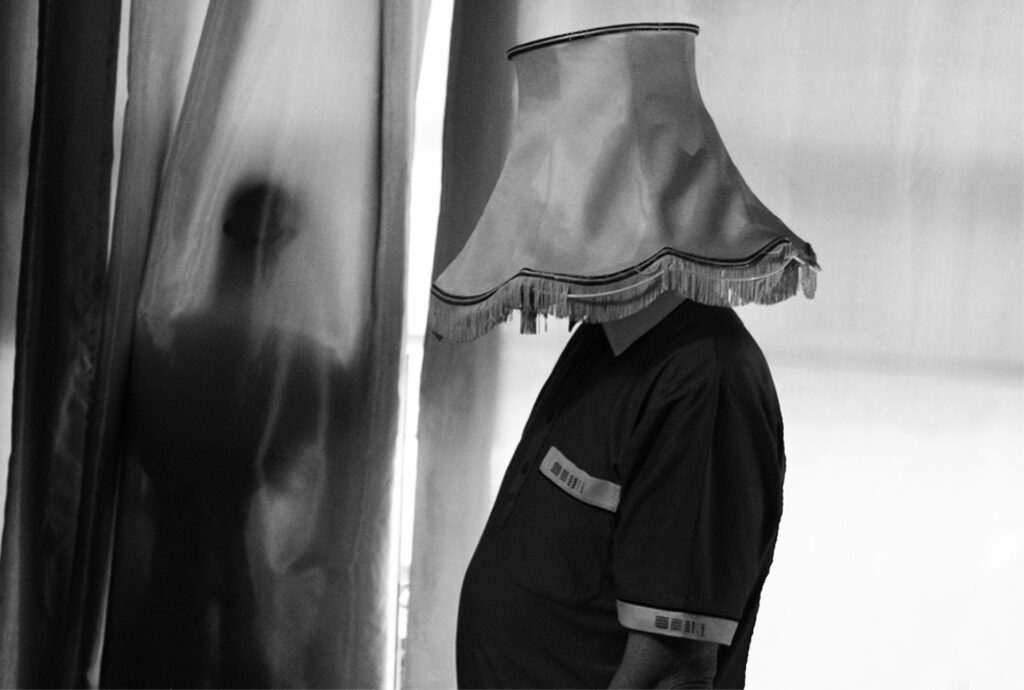 Working alongside Ballyfermot based drama group Basement Productions, Brokentalkers have devised a piece that travels to peoples’ homes. A play in your living room. Or your kitchen. We will perform to an audience of two or twenty depending on the space available.

The Home Project is a timely look at the idea of social housing in a dystopian future, where families are not given the choice of where they live. Where housing comes at a high cost to individual freedom and with strings attached.

The Home Project is the story of a family who has been forced to leave their home and relocate to a new area.

This year Ballyfermot is marking its 70th birthday. The first social housing was built in the area in 1948.

There are 104 roads/streets across Ballyfermot/Cherry Orchard and this ambitious project aims to have a performance in a house on each road over the next few years. 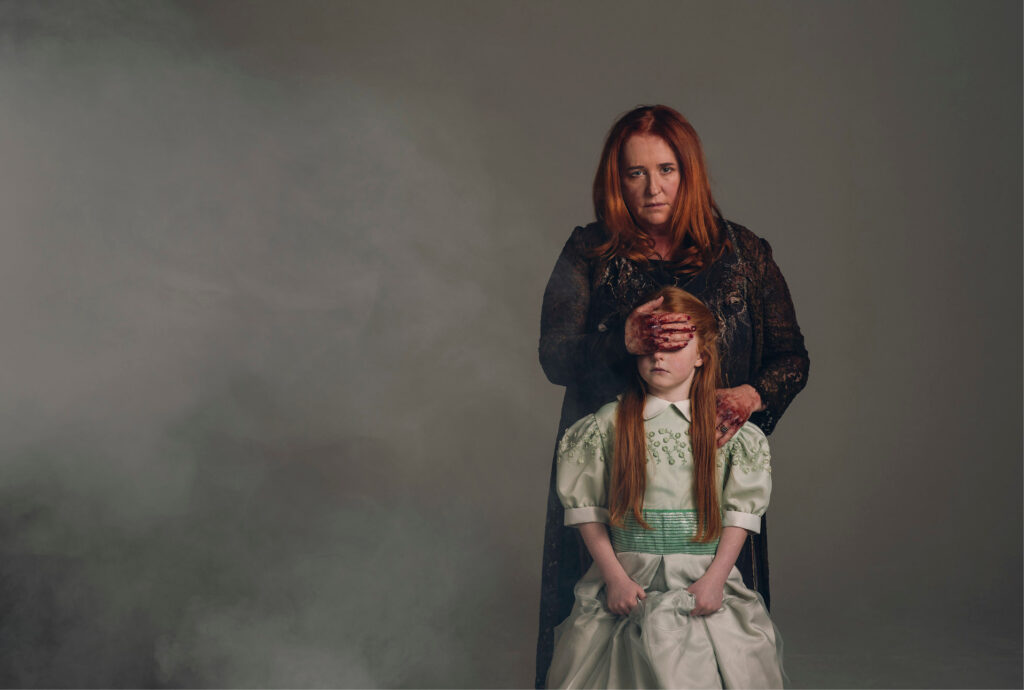 Woman Undone is a re-imagining of the extraordinary early life of one of Ireland’s best loved singers Mary Coughlan,

A profoundly moving, brave and beautiful fusion of theatre, music and dance, Woman Undone explores the shocking story of a young girl who endured physical and sexual abuse, addiction and mental illness, whose discovery of art and music was instrumental in helping her to overcome trauma. The production boasts an all-female cast including Mary Coughlan. 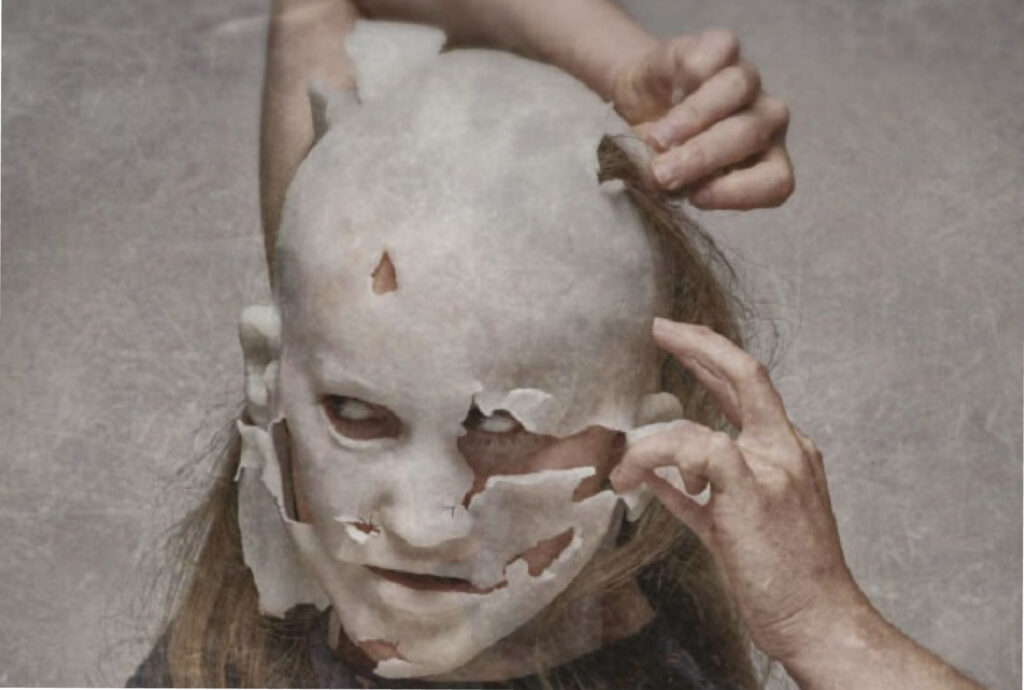 A major new dance theatre performance The Circus Animals’ Desertion is a poetic response to the imagining of nations, inspired by the Automatic Script experiments of Georgie and William Butler Yeats  in which they called upon the spirit world to assist with their creativity

It juxtaposes the romantic notions of  nationhood put forth by Yeats and other early 20th  Century poets and revolutionaries with brutal realities  of extreme nationalism in the light of the radicalisation, xenophobia and oppression engulfing the world today.

Sampling texts and imagery from Yeats’ plays and poetry as well as archive recordings and interviews, the piece is performed by an international cast of dancers  and musicians. 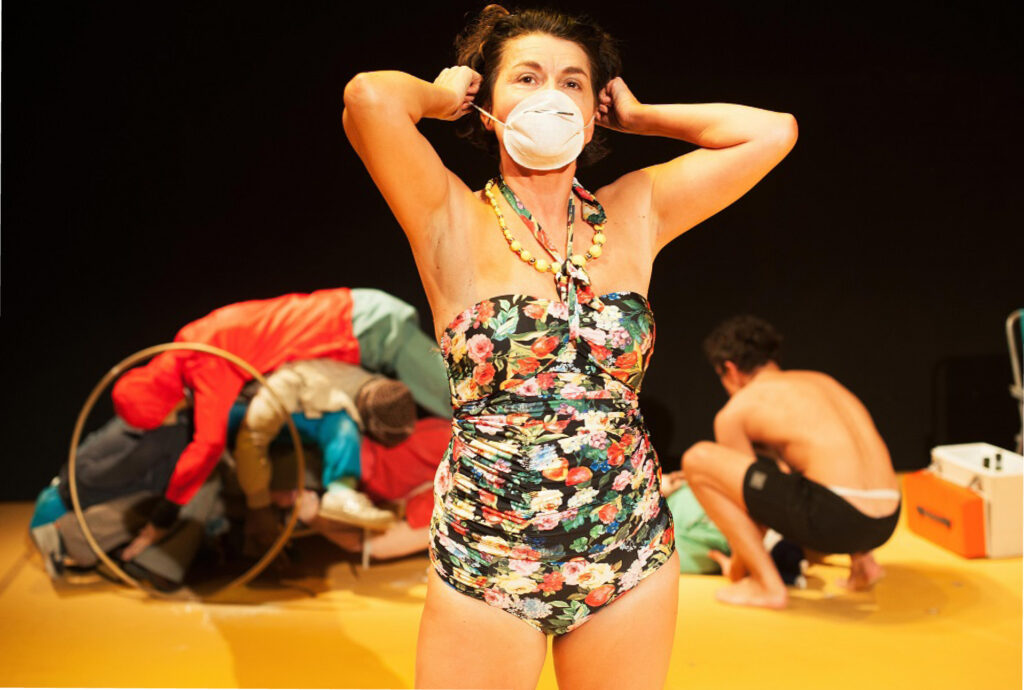 In this production Brokentalkers respond to the current refugee crisis gripping Europe and the notion of sovereignty of one people over a piece of land; and the lengths people will go to bar entry to their dominion.

A private beach inhabited by a family; a European family. They are the owners of the beach. The beach has been ‘in their family’ for generations.The family celebrate a wedding, a union between two sides; each of whom can offer something to the other. Security, prosperity, progeny. During the wedding celebration a stranger arrives on the shore of their beach. The family must decide how to deal with this stranger.. 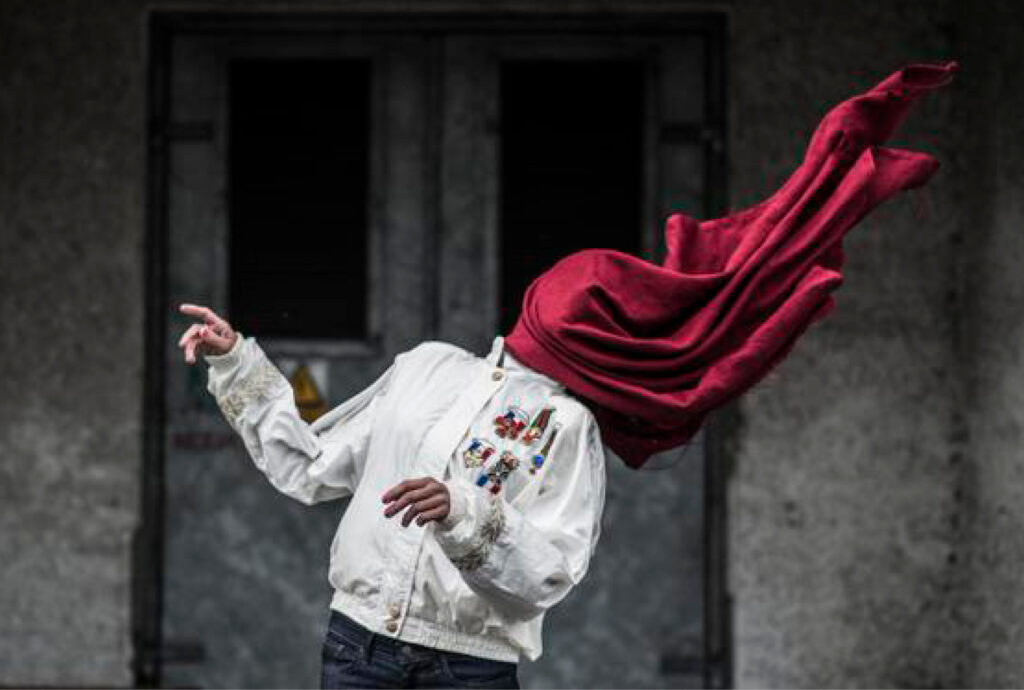 In collaboration with Junk Ensemble, It Folds is a reverie. A dream-like story of death, grief, beauty and humanity. It’s a poignant and humorous portrait of the tragicomic events that shape our everyday lives.

Winner of the Best Performer at Tiger Dublin Fringe Festival 2015. 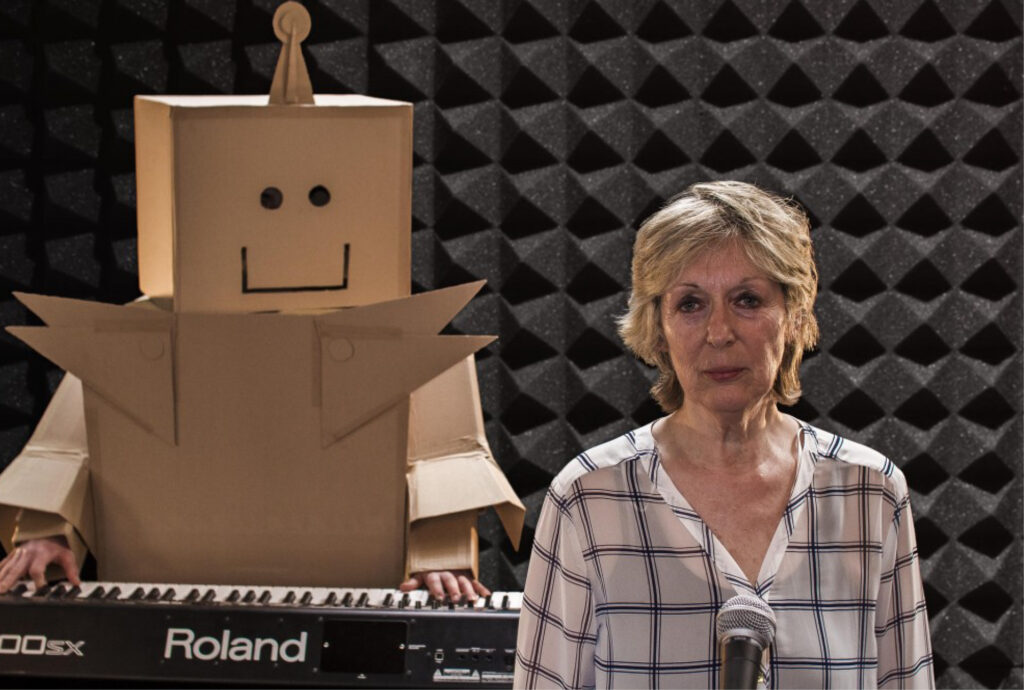 In this bold production, Brokentalkers examine perspectives on health, ageing and the future from the point of view of two different generations. Featuring an original soundtrack by Sean Millar and choreography by Jessica Kennedy (Junk Ensemble), Frequency 783 explores the hopes and fears of two people who dream of a future that they may never have a chance to realize.

Have I No Mouth 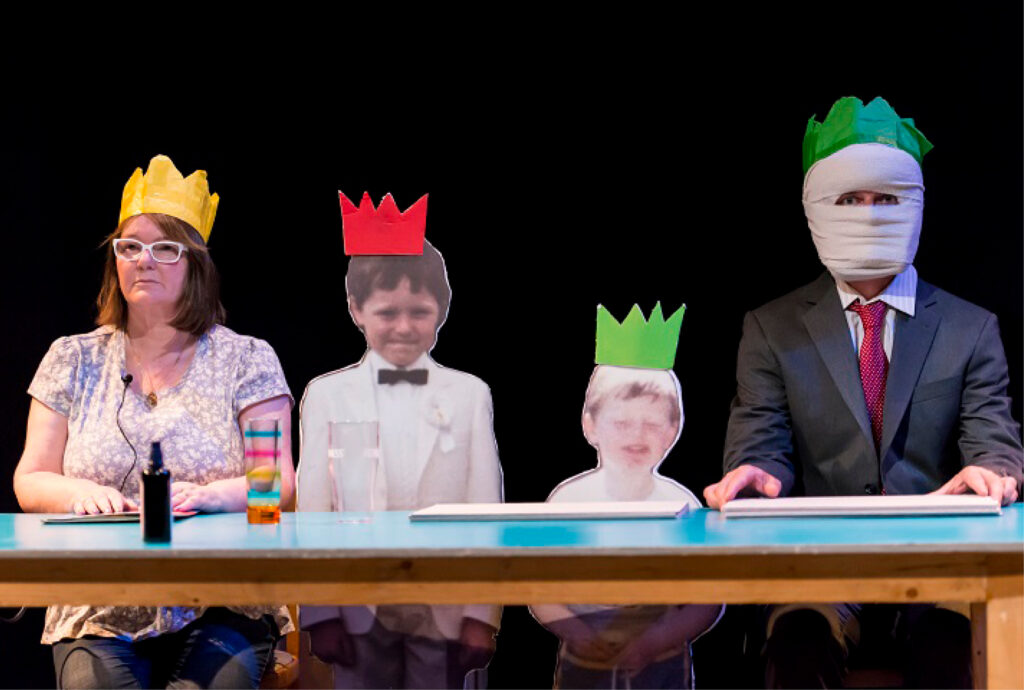 Have I No Mouth is a powerful piece exploring the changing nature of the relationship between a real-life mother and son in the aftermath of a family tragedy. Written and performed by Brokentalkers‘ Co-Artistic Director Feidlim Cannon and his mother Ann, the production takes a brave, unflinching look at their past and attempts to piece together the truth, whilst exploring different ways we heal ourselves after the unthinkable happens. Ann and Feidlim are joined on stage by professional psychotherapist Erich Keller. 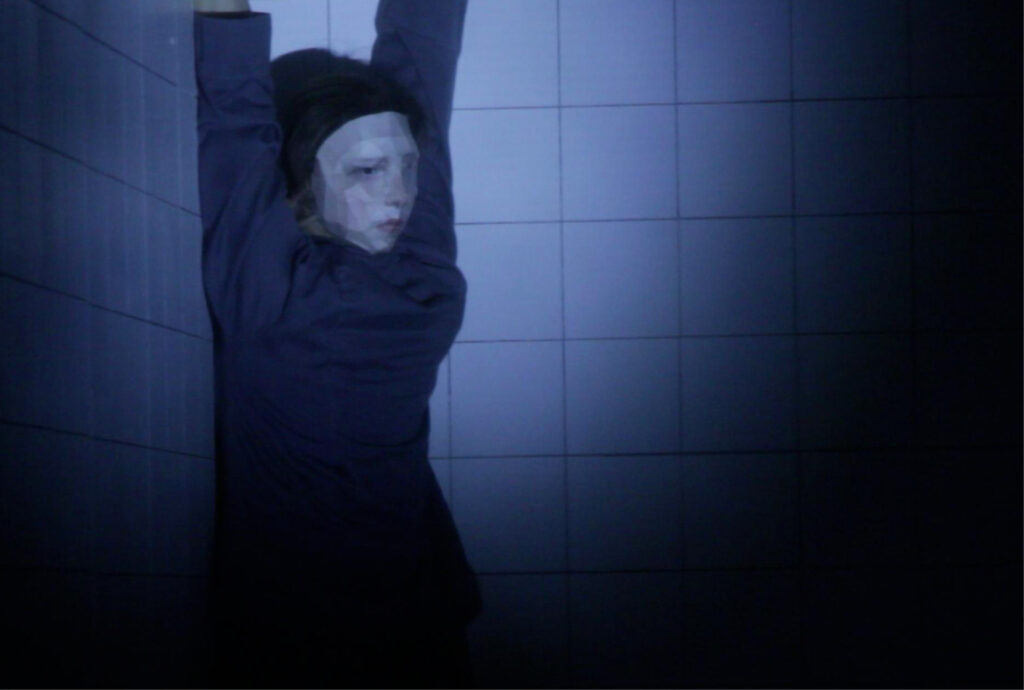 The Blue Boy deals with the experiences of men and women who were incarcerated as children in Catholic residential care institutions in Ireland. 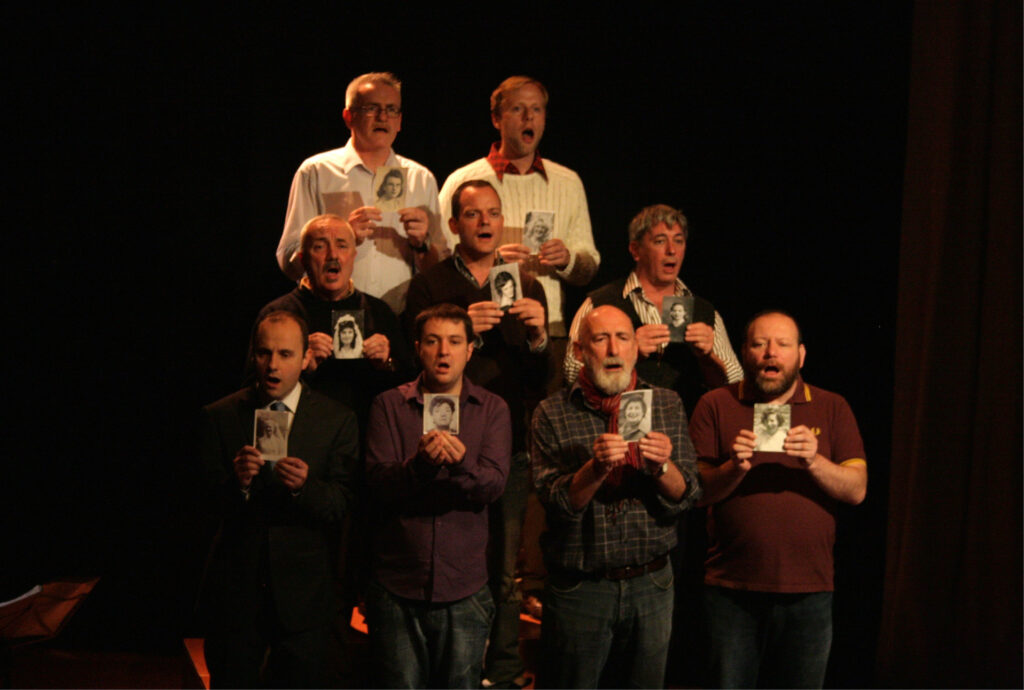 Silver Stars is a moving and eloquent song-cycle, which tells the truly extraordinary real-life stories of older gay Irishmen, men in search of happiness and fulfilment, in a country that was challenged by their very existence.

This Beach
A co-production with the Munich Kammerspiele, the Goethe-Institut Irland and developed at FRINGE LAB. This Beach debuts at Tiger Dublin Fringe 2016

“Brokentalkers, one of the country’s most fearless and path breaking theatre companies”
The Irish Times

“Brokentalkers, the emergent wunderkind of Irish Theatre”
The Irish Independent

The Examination
★★★★
“No easy escapes…. an absorbing production” The Irish Times

★★★★
“exquisite, and really has to be seen to be appreciated.” The Review Hub

★★★★
‘A captivating exploration of humanity and character through a surreal and stylised lens which gets under your skin, permeates your brain and touches your heart.’
Reviews Hub

“bracing sequences … One song, Michael, is both a floating hymn to a supportive robot and a sad rebuke to an absent husband”The Irish Times

The Blue Boy
“A raw and subtle performance with striking choreography and music, a hard swipe at the abuses of the Catholic institution” Dagblad Noorderzon, Netherlands

“Radiates dignity and perfectly conveys the depth, humor, and emotion of the stories making up this intriguing production” The New York Theatre Review

Brokentalkers are delighted to have recently been awarded Best Production & Best Soundscape (Denis Clohessy) at the Irish Times Theatre Award 2020.

Congratulations to our fantastic team and special thanks Catherine Cox, Sinead McCann, all at PACE, Ann Costello and staff at Mountjoy Prison, The Wellcome Trust, Dublin Fringe Festival, Project Arts Centre and to all who shared their stories.

Brokentalkers are thrilled to welcome Creative Producer Rachel Bergin to the company.

The company is currently developing a new production with acclaimed New York artist Adrienne Truscott to be presented in 2021.

Can imagining the future be a collaborative act?
What happens when we can’t agree on what to do next?⁠