The politics of place impact us all in myriad ways but it is often forgotten that the body is our first home. The Here Trio brings the intelligence of the body to the fore, addressing often overwhelming issues of where we feel we belong and how we survive when things are beyond our control.

Taking location and recent histories as its starting place, this cross border co-production challenges preconceived ideas about site, history and the right to belong in a place. Trauma mediates so much of our beliefs and behaviours, and with this in mind, The Here Trio strives to bring us back into the moment – to a place where those scars, present or past, no longer determine our future. 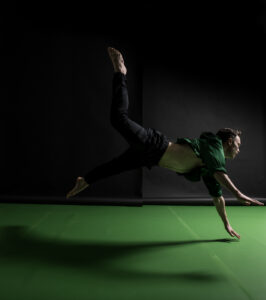 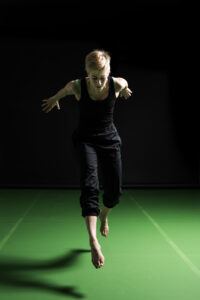 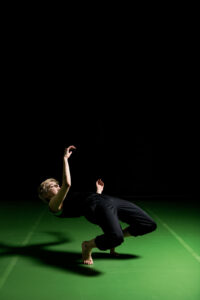 Liz Roche is the choreographer and Artistic Director of Liz Roche Company. Since 1999, the company has produced and toured her works performing throughout Ireland and internationally, most notably at the Baryshnikov Arts Centre, New York, The Abbey Theatre, The South Bank Centre, London, Meet in Beijing Festival and Powerhouse Brisbane. Her work has been commissioned by The Abbey Theatre, Dublin Dance Festival, Cork Opera House, The National Ballet of China, Scottish Dance Theatre, Solas Nua Washington DC, Goethe Institut Irland, Arcane Collective, Croi Glan, DTI and CoisCeim. Her 2015 work Bastard Amber was the first dance work ever to be commissioned from an Irish choreographer for the Abbey Theatre. She has also choreographed extensively in theatre and opera at The Gate Theatre, the Abbey Theatre, Landmark Productions, Lyric Theatre Belfast, Siren Productions, The Ark, Irish National Opera, Wexford Festival Opera, National Opera of Korea, Rossini Opera Festival, Liceu Barcelona, Opernhaus Zurich, Opera de Nice and Opera Ireland. In 2020 Liz was elected to Aosdána in recognition of her contribution to the Irish cultural landscape.

Ryan O’Neill achieved a first class honours degree in Dance from the Ulster University and studied his Masters in Dance Performance at Laban as part of a professional post graduate company Transitions. Since then Ryan has worked with Maiden Voyage Dance, Off The Rails, ponydance, Tinderbox, Oona Doherty Works (NI), Irish Modern Dance Theatre, Junk Ensemble, Panpan, Company Philip Connaughton, Coisceim, Liz Roche Company (IRL), Gwyn Emberton Dance (UK) and Punchdrunk’s Sleep No More in Shanghai. In 2011 Ryan was selected by the Arts Council of Northern Ireland to meet Queen Elizabeth II at Buckingham palace for recognition of his achievements as a young person in the Arts. Ryan is also a qualified Ashtanga Yoga teacher.

Glòria Ros Abellana graduated in classical dance at Institut del Teatre in Barcelona, she continued her studies at Cannes Jeune Ballet (France). She joined Introdans Ensemble voor de Jeugd (NL), with whom she performed internationally in pieces by Jiří Kylián, William Forsythe, Sidi Larbi Cherkaoui, Inbal Pinto. As a freelance, she has worked with Arno Schuitemaker, Arthur Rosenfeld and Núria Guiu, among others. She has recently premiered “IAM | En alguna ocasió”, co-created with composer and pianist Carles Viarnès, and performs as well present time compositions with saxophonist Albert Cirera and singer Celeste Alías. Her shows and screendance projects have been presented in Spain, Bulgaria, Ukraine, Portugal, The Netherlands and Australia. Besides her activity as a performer and maker, Glòria also works as a teacher, movement assistant for theatre pieces, and manager at the performing arts production house Elclimamola. Glòria was awarded 1st prize in Shortcuts – Experimental Dance Film Festival (Austria) and has been a guest teacher at the Irish World Academy of Music and Dance (University of Limerick, Ireland). As a member of the Liz Roche Company (Ireland), she has performed in Totems, I/Thou, The Here Trio and Dēmos.

Lucia Kickham is a Dublin-based dance artist, who has been performing and collaborating internationally since 2011. Trained in The Netherlands, she has worked with companies and artists which include Philip Connaughton, Junk Ensemble, TRASH, Maria Nilsson Waller and Jessie Keenan Dance. In recent years Lucia has been a recipient of awards from the Arts Council of Ireland, Dance Ireland, Tyrone Guthrie Centre, Tipperary Dance and Le Grand Studio Bruxelles. In 2020 she was awarded a Next Generation Award from the Arts Council of Ireland to develop her performance improvisation practice with a recent showing of her work SOLO-ing presented at Tipperary Dance International Festival 2021. Lucia was Dance Ireland HATCH Artist 2018 which lead to the creation of ensemble work, INIT:The Warm Up Project performed at Dublin Fringe Festival 2019. Lucia is Associate Artist with Liz Roche Company 2019 – 2021 and is very grateful for the generous support she has received during this time.

Sarah Cerneaux started street dancing at the age of 17 in France. After completing her degree, she moved to Paris and kept learning with teachers such as Corinne Lanselle, Carolyn Carlson, Julyen Hamilton and Junior Almeida. Since then she has worked with Abou Lagraa Company (2006- 2014), Christine Bastin, David Drouard Company, Vincent Mantsoé and Maryse Delente Company. She joined Akram Khan Company in November 2014 and toured the production Kaash for 2 years.

She began working with Liz Roche Company in 2014 and performed in Bastard Amber, WRoNGHEADED, Pilgrimage and I/Thou. Sarah now lives in France where she works with the Amala Dianor Company and Desiré Davids company. She recently started to develop her own work.

Luca Truffarelli is a freelance photographer and video maker based in Dublin. He graduated in photography in 2011 and started experimenting and challenging himself in the field of visual arts. Over the past few years he has been involved in contemporary dance and theatre works as a photographer/video maker, visual/set and sound designer and artistic collaborator.

Bryan O’Connell is a drummer, improviser, composer of rhythmic acoustic /electronic music. Previous work includes Bastard Amber, Interloper (Liz Roche Company), Hear Me Sing Your Song and With Raised Arms (Liv O’Donoghue). He co-wrote soundtracks to The Adventures of Prince Achmed with Eric Friedlander and others and Fußall Wie Noch Nie with Ernst Reijseger, and others. With Tom Lane, he co-wrote scores for Bird With Boy (Junk Ensemble), Listowel Syndrome and DOGS (Emma Martin). Bryan’s regular collaborators include Beautiful Unit, Si Schroeder, Matthew Nolan, David Stalling, Anthony Kelly and Gavin Prior. He is co-author of a new book on drummer Jaki Liebezeit.

Shane O’Reilly is an actor & writer. Shane recently wrote and directed Windowpane, a monologue written for film, as part of The Abbey Theatre’s Dear Ireland production. In response to a commission from Culture Night 2020 Shane wrote and directed the short film PAL. Other writing work includes; The Water Boys for Equinox Theatre; Näher…closer, nearer, sooner co-created with The Liz Roche Company; FOLLOW, FARM and CARE co-created with WillFredd Theatre as their associate artist; The Genealogy Project (presented as part of an in-development programme at The Abbey Theatre in 2017). He is currently in development with Invisible Thread Films on a new experimental documentary film. Shane has performed with The Abbey Theatre, The Gate Theatre, Rough Magic, Druid, Landmark, Barnstorm and Prime Cut along with other Irish and international companies.

Arudhra Krishnaswamy is a Contemporary dancer, performance maker and scholar from India who is currently based in Dublin. She has a PhD in Dance Anthropology (NUS) and a Masters in Drama and Performance (UCD). She has been a lecturer of dance at the Lasalle College of the Arts, Singapore and Nanyang Academy of Fine arts (NAFA) and is currently a lecturer of Theatre and Performance at both UCD and Dundalk Institute of Technology alongside being an independent artist who teaches various workshops and guest faculty classes with a number of art spaces as well as studios. She has taught various workshops and intensive programmes both locally and internationally including Singapore, Jakarta, Tokyo, Bandung, Delhi, Jaipur, Kolkata, Mumbai and Dublin. She is a former company dancer of The Danceworx, India and The Royal Dance Off Company, Singapore. She is a scholarship recipient to the International Student Visa Programme, Broadway Dance Centre, New York and an Emerging Scholar Award recipient of the International Conference on the Arts in Society held in Portugal in 2019.

“An intriguing reflection on space, history and the transitory, uncertain nature of our humdrum existence.” ☆☆☆☆ JANE COYLE THE STAGE UK