Learn more about the show before you go...

Garden is a newly commissioned exhibition by Dublin-based artist Niamh O’Malley.Known for her painting and sculptural interventions, and more recently for her explorations of monumental sites, O’Malley will take us into a personal landscape using video and sculpture – the garden which she and her family shape and create with the changing seasons. Featuring a new video installation and a large painting on glass, this landscape will be revealed through  screens, mirrors and windows.The video work will show a mirror panning and tilting, reversing the normal flow of light and camera movement, slowly and silently illuminating the garden in an elusive dance. Accompanying the video work and set into a wooden seating platform, a large glass plane will have textures and marks painted on both sides, creating a painting which is visible from both the front and back – a limitless image which complicates ideas of reverse, background, and negative space.

The Window & the Mirror

Projected onto black cloth, the dual channel film Garden, was shot from a static position. Within the unmoving frame, a large plain mirror is held, acting as a pivot and fulcrum for the filming apparatus, and itself the subject of the film. The mirror is held aloft and manoeuvred by two disembodied hands which direct the tilting and panning and thus the movement of the image that appears within it. An image within an image is revealed through a rhythmic edit, overlapping and oscillating between the two frames, gently building a portrait of the space we believe ourselves to be within – a walled, domestic garden of inner city Dublin. Niamh O’Malley’s garden, to be precise.

As the image pans over tangled vines and wilful bushes, climbing up textured walls and reaching for horizon followed by sky, we can imagine the real space of the garden, flanked by a towering wall – the embankment of a commuter train track.

Niamh O’Malley’s recent film works have taken monumental sites as their subjects: from Britain’s biggest bridge and an island made symbolic through Catholic pilgrimage, to an immense working quarry. In Garden, O’Malley shifts her focus to a more personal and intimate subject, the garden that she and her family shape and reshape throughout the year.

“I was trying to figure out why I’d made all these works of monumental places and sites. I was thinking about intimacy, and also the how a subject is produced through scrutiny, or examination. Working in the garden while scrabbling with these questions I realised that the garden was a perfect site of production, intention and the shaping of a space.”

The mirror is a simple device but also serves as a window into the real. It tells us, if only momentarily, that we are looking through a wall and into another world. But sooner or later we’re likely to move into the field of reflection, disrupt the illusion and realise that we’re simply seeing our own surroundings reflected back to us. There is no outside, there’s no real, there is simply an image loop. Space, which had seemed extended through the protective plane of the window, is suddenly more confined, and the world a fraction closer.

The exhibition also includes a large painting on glass, which calls us to consider the illusion of the mirror in relation to the evolution of painting, and to the effort that figurative and landscape painting make to persuade us of a realism in their view. It is a subjective realism, but one that nonetheless relates to a lived experience. With the development of abstraction, and eventually the resistance of the idea of a physical, embodied subject within the frame at all, painting has been able to deny the illusion of the window, just as our reflected image in the mirror does.

Through Niamh O’Malley’s film we are confronted with a different sort of image, a mirror that in some ways appears to be a window to the real, and in others to be a mirror-object. Our certainty of space becomes muddled, conflicted and stimulated. Contemporary painting is also enabled by both sides of this image-making coin, slipping between the representational and the abstract, with both approaches and discourses intrinsically embedded into its history, creating an inescapable context for the medium itself and a dynamic field for image making.

Against this backdrop of illusion, Niamh O’Malley uses the mirror device to construct a gaze that concentrates on a question of selection – on what does our attention settle, and with what has our attention been focused? These are questions of interest to many who consider how attention is captured (and thus how to better capture it), how attention is framed (and thus how to more effectively control it), and how perception is formed (and therefore how to more thoroughly understand ourselves).

The idea that individuals assert creative influence (and therefore some responsibility) over the way they perceive is what phenomenologist Maurice Merleau-Ponty calls ‘creative receptivity’. When having a visual experience, the perceived view may alter in our mind – the result not of any re-arrangement of landscape or objects, but of the way in which our perception is encountering and absorbing it. In this way, the perceiving subject and the object perceived are understood to be inherently linked.

Merleau-Ponty reminds us of this through a commonplace activity happening all over the world all the time: the parking of a car using rear-view mirrors. It is a wonder that during this relatively complex manoeuvre there aren’t more frequent bumps and errors in judgement. Merleau-Ponty describes the activity not so much as the result of a series of terrifically clever and accurate equations and judgments resulting in the correct degree of wheel turning and speed of acceleration, but more in the kind of embodied intelligence which exists in an expanded sensory field. In this case the car itself, with its rear view mirrors as its whiskers, is the expanded sensory field – the driver is the car – and the car is manoeuvred into place using this embodied intelligence.

What is so striking in Niamh O’Malley’s film is that although the person clutching the mirror operates it as an extension of their own sensory field (and against the tension of the physical difficulty of holding it steady for long stretches of time), the perceiver, through the subjective gaze of the camera, has somehow disappeared. While understanding that the body holding the frame is the orchestrator of our attention, we also realise that our own position in the frame has been tampered with, tricking us into perceiving with a body that now seems to not be there at all.

Something of the beauty of these subtle yet vital implications lies in the fact that there’s not a digital alteration amongst it, and that all that’s being experienced occurred in the moment it was shot. The process of film is here turned on itself so that the ‘lens’ we see shifting is actually framed in the image as an object, rather than invisible inside the hidden workings of the camera catching the image. This is why we call it a work of film, rather than video. The enigmatically ‘disembodied hands’ aren’t actually disembodied either, the rest of the body is visible in black below the mirror, but the effect is still more striking than the reality, with the image of disembodied hands remaining lodged in the memory.

There is also something almost comic in the basicness of the action, the isolation of the hands, and the simplicity of the scene. It is like an analogue allegory for a digital age, orchestrated without special effects or trickery, and yet produced entirely with digital materials. This coy relationship with illusion is further complicated by O’Malley’s continuous use of black cloth as the surface onto which her films are projected. As she says, the black surface absorbs light so effectively that the image sinks into the surface, making it curiously and emphatically flat, belying the spectacle of its illusory promise.

These questions around framing of attention, explorations of selection and embodied intelligence are pinpointed by her frame-within-a-frame film, and then expanded again in the second artwork in the exhibition. The painting on glass is framed and sandwiched between seating platforms, to be viewed from both sides. If the film turns our attention to the lens created by the moving mirror, the transparent surface she has been painting onto does quite the opposite, opening limitless variations and completion points, both for the spectator and for the painter herself. In a process that has to unfold with something of a domino effect, O’Malley treats both sides of the glass surface with marks (sometimes figurative, mostly abstract), creating no definitive viewpoint and a non-linear build-up of shape, texture and form. While adhering to a prefigured concept of the image she wanted to make, the process has also been stimulated by chance occurrences, one mark making necessary another – the way things go.

And just as we are stimulated by the complexity of the mirror’s effect on our understanding or real and illusory space, we are also delighted by the muddled knowledge implied in abstract painting. We know abstract painting to contain form, or at least we will it to contain form, even if only the faintest residue, perhaps of tone, colour, shape or texture. This allows us to convincingly grasp the process of abstraction; the gradual complication (and reduction) of something already experienced in our lives, to something that is free from restraint of representation, and open to a prism of reflections.

As with most windows, this large, two and a half metre wide sheet of glass also has a reflective quality, and it reflects fleeting glimpses while also revealing in its transparency the world beyond the window – the space behind the structure, the rest of the room, or a person sitting opposite you on the bench. 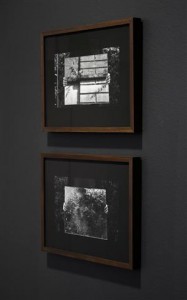 A limited edition set of giclée prints (‘Wall’ and ‘Wisteria’) featuring stills from Garden by Niamh O’Malley are available to purchase from Project Arts Centre. The prints are available unframed (€120 each or €220 for both) or framed (€220 each or €420 for both). To purchase, please contact box-office@projectartscentre.ie or call 01-8819613.

The Future has been Bad

Hi there,  How are you doing today? We hope you and your family are staying safe and sane during these strange days. We've been thinking about how we stay connected. It's not easy. Some of us have to stay indoors all the time. Others mostly all of the time. We've had letters and postcards through our letterboxes that made us smile. We've got emotional sending messages of support and solidarity to others. Some of us have wifi, Social Media and laptops. Some of us don't. So, we're starting LOCKDOWN LETTERS. To try to stay connected to as many of our…