i Ride in Colour and Soft Focus, no longer anywhere 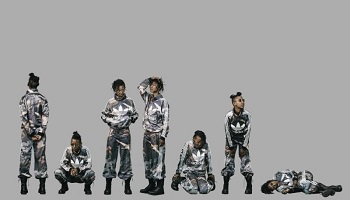 A hybrid performance about now (this moment), with an instinct for the offbeat, the sensual pleasure of small dances, a curiosity for what has that preceded and a feeling for the friction that lies between things.
A choreography that prioritises density over going anywhere, noise over silence, now over yesterday and pleasure over doing it right, whilst questioning conventions of narrative, rhythm, framing and what it means to be good. a dance that understands form as emergent from the tension between things, as a fiction to be dismantled and performed over again.
A meditation on osmosis and internalisation, the responsibility of blackness and queerness, the pressure to ‘take space’ and the feeling of being possessed by other people’s fantasies.
A rhythmic interface, an atmosphere, a landscape with the texture of my current mental state. a dance informed by everything and everyone I have ever encountered, all the things I have seen, heard, felt, been beside that have become parts of me, as I try to identify my own voice.
i Ride in Colour and Soft Focus, no longer anywhere, as it is presented at Live Collision, is the beginning of a longer process.
Click here to read more about Jamila Johnson-Small 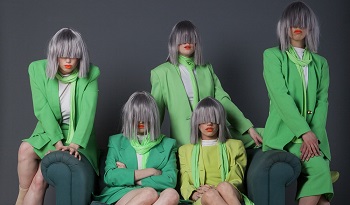 Figs in Wigs are often onstage but how did we get here and how do we leave?
Often Onstage is an offbeat facetious romp that explores the ins and outs of the stage through the medium of dance.
With one step forward and two hundred steps back this choreographic exercise in comings and goings plays with a myriad of ways to enter and exit the stage, unearthing dormant anxieties about life choices along the way.
With curtain calls, blood baths and exits pursued by bears, Often Onstage revels in the absurdity of theatrical traditions with the straightest of faces.
There’ll be nods to the new, alongside bows to the Bard, as well as an underlying sense of doom that theatre is a dying art form.
What if the only thing keeping you going are inspirational quotes and a subsidised income from your side project as a Backstreet Boys tribute act?
It’s only a matter of time before we sell out, and we don’t mean tickets…

Notifications Off: An Electronic Sheep Tapestry, commissioned by First Fortnight

Notifications Off: In Conversation

Festival / Workshop / 14 Jan 2023 €5 Cube | First Fortnight
Do you own an object that brings you happiness? Something you could not live without? Perhaps you have a few, ...
Read More

THE PIECE WITH THE DRUMS by David Bolger

One Two One Two LIVE at Project

Music / Performance / 03 Dec 2022 €16/15 Space Upstairs
Controlled, Pristine and Mesmerising: just some of the words used to describe the talent and performances to date by One ...
Read More
‹
›
Skip to content