The Rest is Action
Politik
As you now are so once were we
Who is Fergus Kilpatrick?

Working regularly with associate artists Brian Bennett, Rob McDermott and Stephen Dodd, The Company has brought their work to many international festivals around the world, including RADAR L.A. (United States), FNT Festival (Romania) and The Full Irish Festival (Berlin, Germany), to name a few.

Not conforming to any traditional model of making work for the theatre space, The Company works primarily by transforming bigger philosophical issues and current political and social trends into accessible and engaging devised performances.

Always entertaining and surprising, The Company is interested in pushing the boundaries of how we look at and see the everyday, shifting audiences perspectives to a new point of view.

The Company recently screened their short film Under the Selfsame Moon at the Lighthouse cinema as part of the Lighthouse Shorts programme, and are planning  sending it on a festival tour going forward.

The Rest is Action 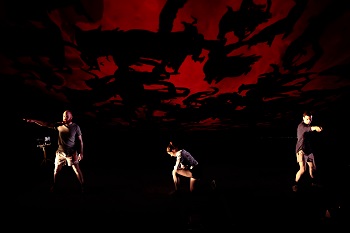 What was empty is what now makes it all work. Empty gestures become action. 2,500 years ago we invented a fiction called tragedy. We believed in it so much it became real. We live it now. Why can’t we get out of it? Why do we still need a fiction to live in? This is not the story of a tragic hero, it is yours.

The Rest is Action is available for touring. 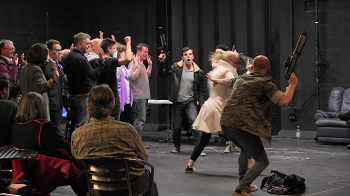 Trying to find new ideals within a social and economic whirlwind, The Company have set themselves a challenge: to make a show not about the world we live in, but the one we could create. Come, get entangled and find out which part you play.

“Politik certainly succeeds in empowering the audience; we discuss, we suggest and we make decisions. This is a system in which we make changes and we see them play out.”
Irish Theatre Magazine

Politik is available for touring.

As you now are so once were we 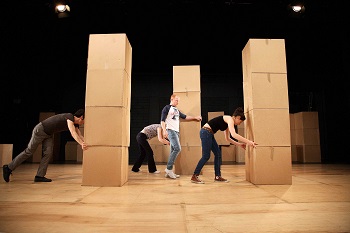 James Joyce wrote Ulysses 100 years ago making Dublin an iconoclastic city forever associated with language and identity. Retracing the steps of Joyce, The Company investigates what it means to live in Dublin today.

As you now are so once were we is available for touring.

Who is Fergus Kilpatrick?

An unknown name has been found in the records of our history. Why havent you been told about him? Why was he kept a secret? And who is Fergus Kilpatrick?

A re-imagining of Irish history. Theatre, video and stories filled with white lies and conspiracies clash with old footage, old documents, old heroes to uncover new answers, a new company and a new truth … or do they?

Project Arts Centre is pleased to announce an open call for a series of 3 artist commissions. Future Forecast is a series of events and artistic interventions forming part of a speculative voyage towards the future. Future Forecast is a multiway transmission with 2020+ vision. For the Arts sector, the last few months have been a time of crisis, but also a time of reflection. The building is a luxury and we miss it. We miss artists making their work in our spaces and audiences making a journey through the building to see that work and we miss being together…