One Two One Two make music and theatre art that attempts heartfelt communication with its audience. We make original work for theatre based on deeply felt writing, expressed in layered theatrical language. It is low concept, serious pop. One Two One Two was founded by Zoe Ní Riordáin and Maud Lee in 2018.

Zoe is a theatre writer-director and musician from Dublin. Her current projects include; Everything I Do, which premiered at the Dublin Fringe Festival September 2018 (winner of Best performer award-Zoe Ní Riordáin). She is also developing a new Irish language opera, Éist Liom (Listen to me) with support from the Arts Council and Dublin City Council. Zoe wrote and directed Recovery, which premiered at Project Arts Centre in April 2016, programmed at LIVE COLLISION International Festival in Dublin, toured to the Centre Culturel Irlandais in December 2017, and is currently touring in Ireland.  She co-wrote and directed The Well Rested Terrorist (Peacock Theatre, Tiger Dublin Fringe Festival 2014, nominated for Best Ensemble award). Other directing credits include; the European premiere of Toshiki Okada’s ENJOY (Project Arts Centre, Rough Magic SEEDS production), The Lesson by Eugene Ionesco (Project Arts Centre, May ‘13). After The End by Dennis Kelly (BAC, London, ‘10). As a cellist, Zoe is a member of contemporary electro-pop band Maud in Cahoots. Other credits include Dusk Ahead by Junk Ensemble (Dublin Theatre Festival, Kilkenny Arts Festival), Silver Stars by Sean Millar (New York, Paris, Auckland 2009/10). She is an alumni of the Irish Theatre Institute’s SIX IN THE ATTIC resource sharing programme. Zoe was selected as the director on the Rough Magic SEEDS programme 2014-2015.

Maud is a singer, violinist, songwriter and theatre performer. Maud founded and fronted Maud in Cahoots in 2009 in New York City. She led the band to being awarded the Arthur Guinness Bursary for new music in 2011, which took them to London to record a critically acclaimed EP with Max Heyes (Primal Scream). Maud in Cahoots toured the US, Canada and the UK, as well as playing all the major Irish music Festivals. Maud’s theatre work includes The Well Rested Terrorist (performer, co-writer ), Recovery (performer, co-writer) and Brokentalkers’ The Circus Animals’ Desertion (violinist, performer).

One Two One Two are resident artists of Project Arts Centre, Dublin.

One Two One Two are developing a new Irish language music theatre project called ÉIST LIOM (LISTEN TO ME). It’s a story about bad communication. We are Irish speakers that have lost it a bit. This piece will try and tell a new story using a language that we love. Development is supported by Pan Pan International Mentorship programme, Arts Council of Ireland, Dublin City Council Incubation Space award and the Abbey Theatre. You don’t have to speak Irish to understand. ÉIST LIOM will premiere in the Abbey in September 2020 as part of Dublin Theatre Festival.

Late at the Gate

A stripped back and intimate reckoning with the audience. Zoe Ní Riordáin’s songs bring you into a relationship with her that needs to be resolved. Join her in an attempt to make a connection with a room full of strangers. Her songs will take you by the heart and won’t let go. 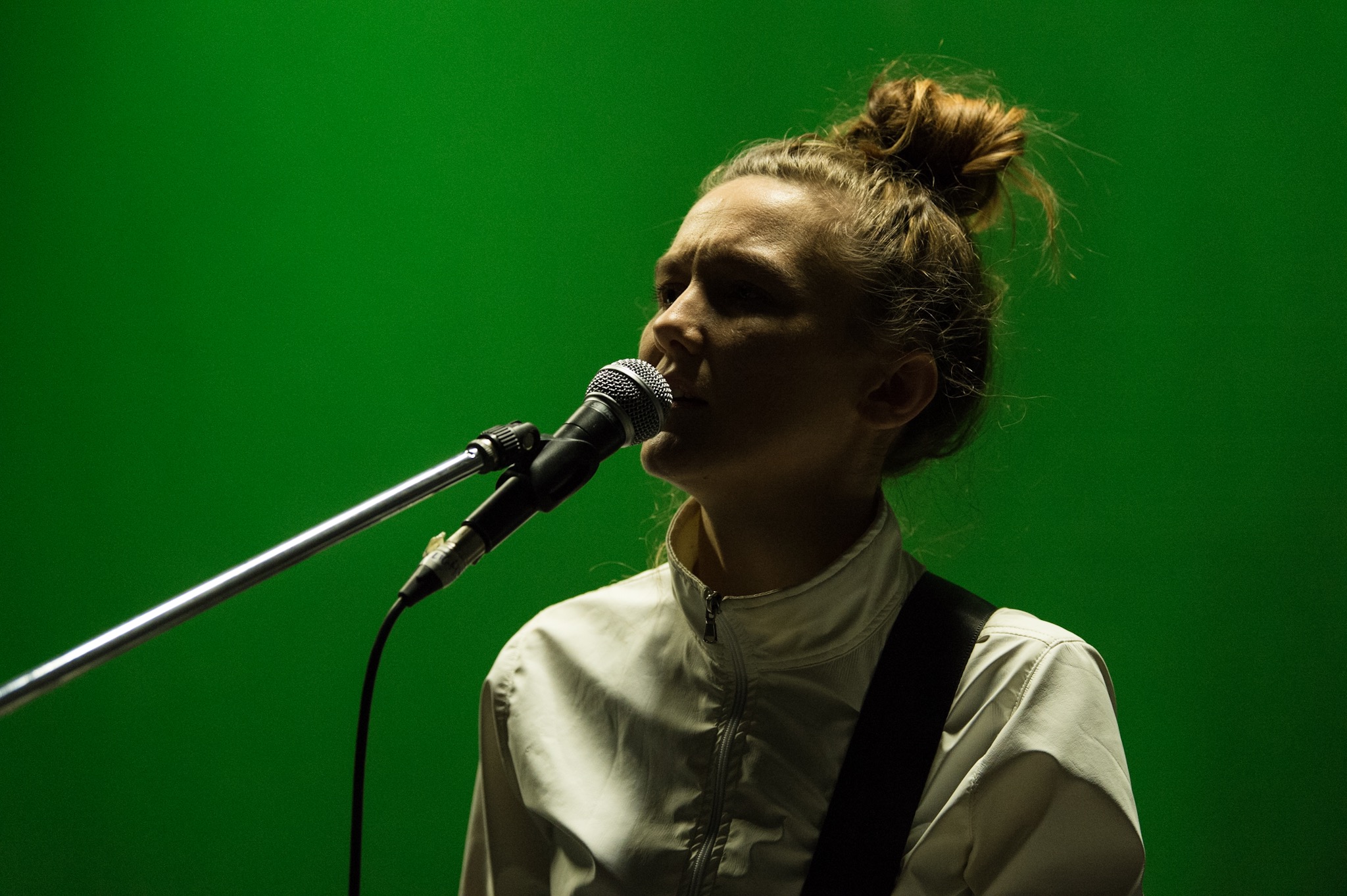 “I want to help, I want to help you, everything I do is for you, everything I do is for you.”
Accompanied by her guitar, a hysterical pop singer riffs on love in a lonely universe. She’s attempting heartfelt communication with a room full of strangers. It’s a solo exploration of co-dependency. A live action album of original pop songs from Zoe Ní Riordáin, powered by a need to express the inexpressible. Premiering at Dublin Fringe Festival 2018, Everything I Do is a live concept album performed by Zoe Ní Riordáin and Aoife McAtamney and directed by Maud Lee. Simon Cullen produced the album and designed the live sound of the show. 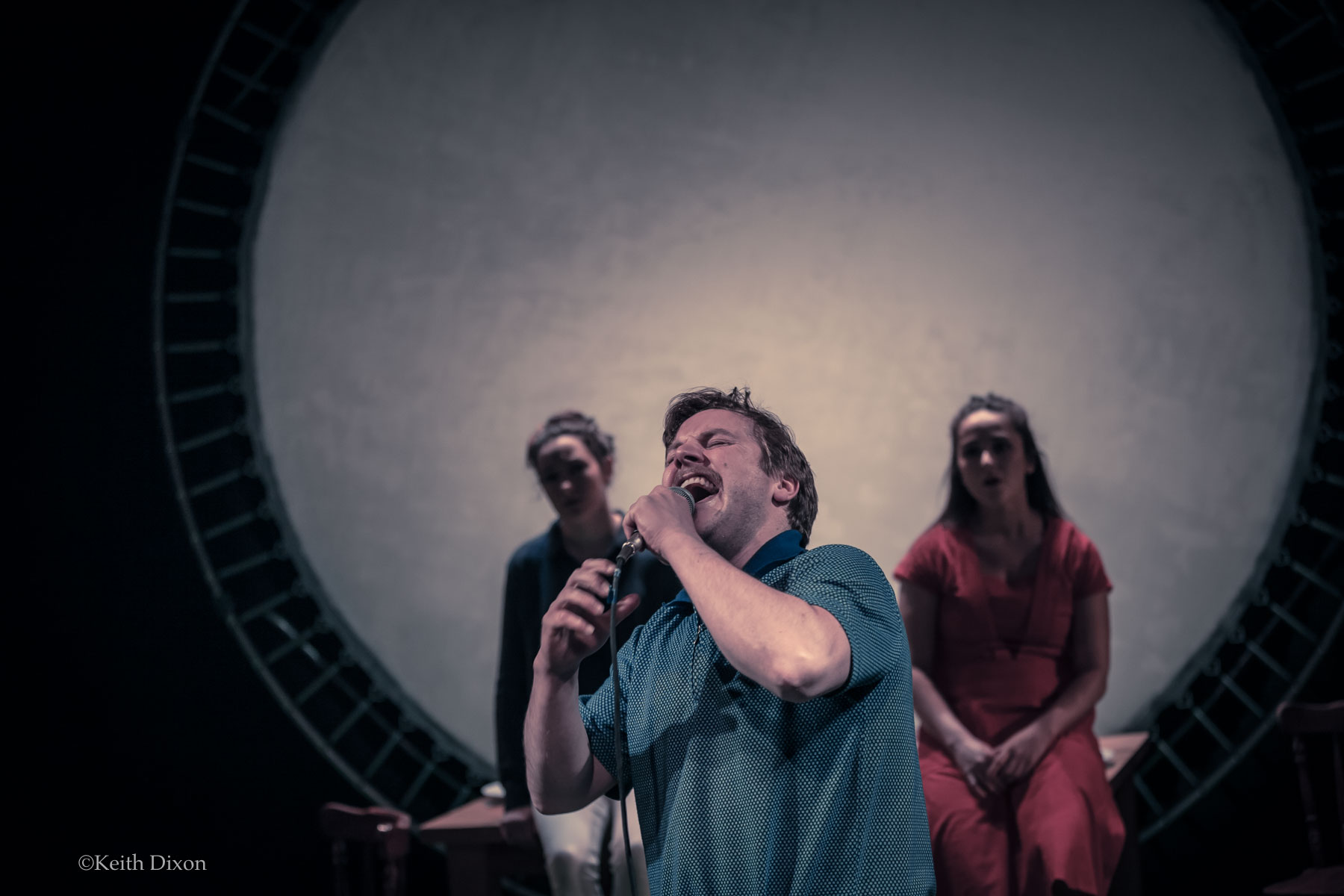 ‘A show about family and letting go, told through song.’
Featuring twelve original songs, performed using live vocal looping and abstract movement. Peter Coonan (Love/Hate) and Maud Lee (Maud in Cahoots) star in this live staging of a concept pop album combining twelve original pop-styled songs with contemporary choreography to paint a moving portrait of a fractured modern family dealing with life after a crisis. Recovery invites us, in near-spiritual fashion, to react on our own experience of family and the many forms that recovery takes.Recovery is a  humorously poignant work which blurs the lines between music and theatre. 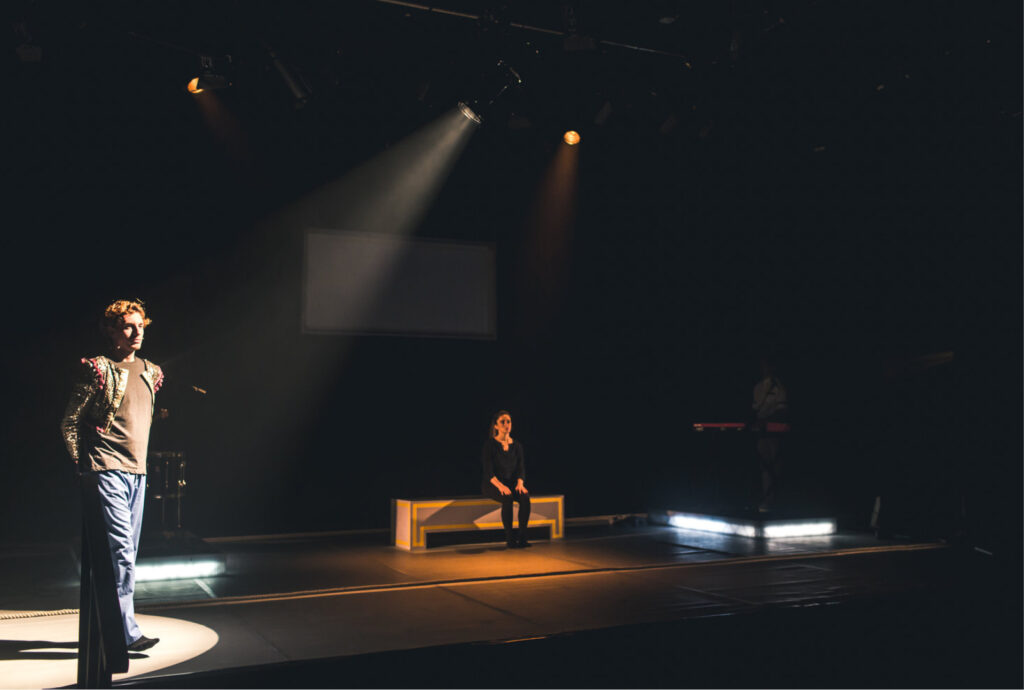 This play/concert is a unique interpretation of the relationship people have with music. The fear of music known as Musicophelia, is at the heart of this production. Seen through the eyes of a troubled sufferer of the condition, you will be taken through a range of emotions as the lines between fear and action, desire and fulfillment, fame and infamy often become blurred. The Well Rested Terrorist is a live concept album directed by Zoe Ní Riordáin for the Tiger Dublin Fringe. Performed by Maud in Cahoots, and featuring work by Rory Fleck Byrne and Martin McCann, the piece straddles the realm between theatre and musical event. 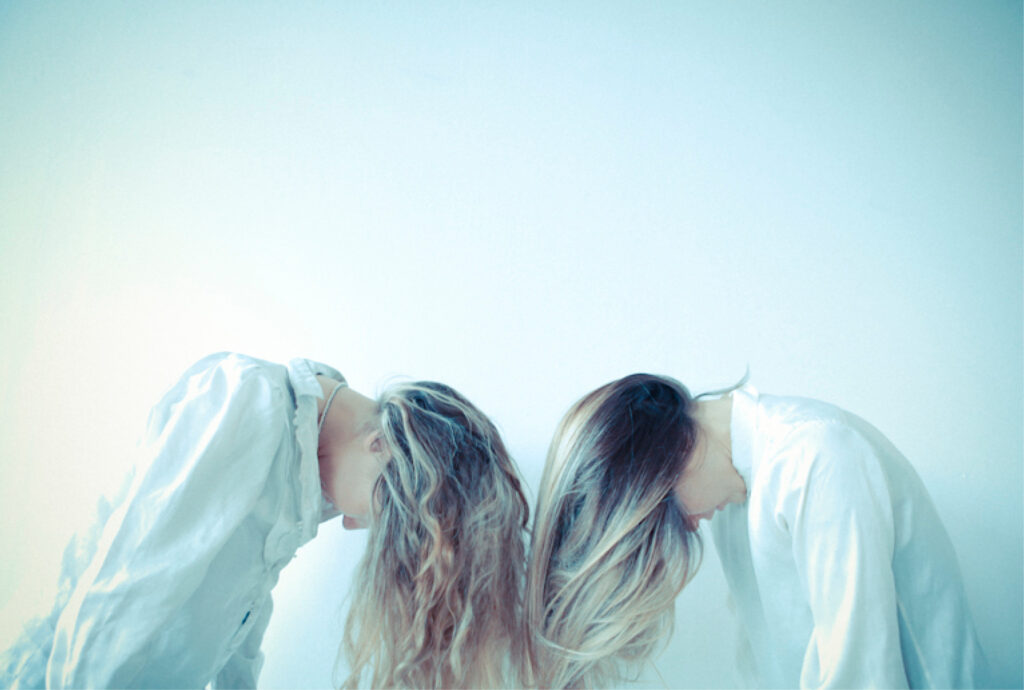 Maud and Zoe founded the band in New York City in 2009. Described by others as ‘alternative Scandanavian orchestral pop’, Maud in Cahoots honed their craft by playing live across NYC, The US and Canada. they were awarded the Arthur Guinness Bursary for new music which took them to London in 2012 to record a critically acclaimed EP with Max Heyes (Primal Scream). They have toured the UK and Ireland, playing at all major Irish Festivals. The band have now moved on to become One Two One Two and we look forward to the new chapter!

Everything I Do
Premiered at the Dublin Fringe Festival, 2018

The Lesson by Ionesco
Project Arts Centre, May 2013

The Well Rested Terrorist
“Maud Ní Riordáin is a striking, controlled presence with a pristine voice” The Irish Times

“Recovery has an identity that defies itemisation…The word that kept coming to my mind was patience, a sense that things would take as long as they took, that the moments of musical glory will arrive when they are earned and then go when they’re over.” Dylan Coburn Gray for Draff magazine

Everything I do
**** Peter Crawley, Irish Times

One Two One Two are currently working on an Irish language piece called ‘Éist Liom’ (listen to me) in collaboration with Shaun Dunne.

It takes inspiration from the city and the opera Carmen. Éist Liom is a co-production with the Abbey Theatre in association with Cork Midsummer Festival and is due for production in 2021.