‘The Kennedy twins have been crafting works of oblique and beautiful weirdness for many years now, and their company Junk Ensemble, is the nearest we have to a genuinely original contemporary Irish dance corps.’ The Irish Times

‘Junk Ensemble has created some of the most impressive contemporary dance in Ireland... Enthralling and exact’ The Sunday Times ★★★★

DOLORES
"Dolores combines visual eloquence with the gut-punch of a victim impact statement" The Irish Times ★★★★
"There is simply no resisting “Dolores’” power. Provocative and unapologetically brilliant, “Dolores” offers a uniquely thrilling experience..." The Arts Review ★★★★

SOLDIER STILL
'Raw power and palpable elegance ... Stirring, poignant ... Not to be missed ...' The Arts Review ★★★★★
'Junk Ensemble’s most visually focused work to date.' The Irish Times ★★★★
'Dynamic and rich contemporary contemplation of the trauma of militant violence.' The Reviews Hub ★★★★
'Uncompromising and indelible work ... dazzling in its terrible beauty.’ The Big List (Northern Ireland).

IT FOLDS
'David Lynch would be proud ... macabre beauty ... shot through with haunting music' The Times ★★★★
'Harrowing and elegiac ... haunting and beguiling ... It Folds builds and passes like the shadow of some terrible, beautiful dream' The Stage ★★★★
'Rich theatrical pickings' The Irish Times ★★★★
'Perturbingly powerful, this beguiling production is stirringly beautiful' Broadway World ★★★★

Junk Ensemble is an award-winning Dublin-based dance company founded in 2004 by joint Artistic Directors and identical twin sisters Megan Kennedy and Jessica Kennedy to create works of brave and imaginative dance theatre. Previous Artists in Residence at Tate Britain and current Cork Dance Artists in Residence at Firkin Crane, the company have won Best Production Award, Best Design, Best Lighting Design, Best Performer, Culture Ireland Touring Award, Excellence and Innovation Award and are listed a Sunday Times Highlight. Their productions are often created in collaboration with artists from other disciplines to produce a rich mix of visual and performance styles that seeks to challenge the traditional audience performer relationship. This approach has led to productions being created in non-traditional or found spaces as well as more conventional theatre spaces. Junk Ensemble’s work continues to tour nationally and internationally.

The Book and the Body

Jessica Kennedy and Megan Kennedy of Junk Ensemble  curated a two-strand symposia entitled ‘The Book and The Body’ in National University of Ireland, Galway and University College Dublin in April 2018, as part of Dublin Dance Festival partnering with Dance Ireland and Live Collision Festival. The symposia surrounded a new Junk Ensemble dance-theatre production, an off-site work titled Dolores, which is inspired by Vladimir Nabokov’s visual and disturbing novel ‘Lolita’, and premiered in May 2018.

‘The Book and The Body’ Symposia was comprised of panel discussions, masterclasses, a viewing of an open rehearsal, roundtable discussions and international keynote speakers, and took place at the National University of Ireland Galway: 13-14 April and University College Dublin: 20-21 April, covering themes which include: body & literature, gender & performance, sexuality and abuse, trauma & memory, how the body is represented in literature through the male perspective, and Vladimir Nabokov’s novel ‘Lolita’.

Inspired by Vladimir Nabokov’s visual and disturbing novel ‘Lolita’, Dolores is a powerful and uncompromising work finally told by a silenced girl. Dolores gives a voice to the neglected and traumatised child, the candy girl full of hope and the enraged woman full of fire and revenge. Performed by the acclaimed Mikel Murfi and Amanda Coogan, Irish & international dancers and musicians and exquisitely designed as an off-site piece, Dolores digs into the poetry of the novel and exposes the unsettling abuse and tragedy of a young girl through imagery, song, dance and text.

Direction and Choreography: Jessica Kennedy, Megan Kennedy created in collaboration with the cast. 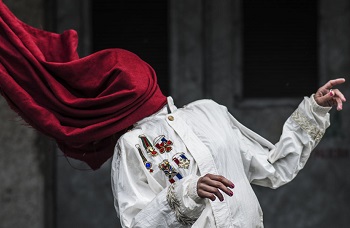 In collaboration with Brokentalkers, It Folds is a reverie. A dream-like story of death, grief, beauty and humanity. It’s a poignant and humorous portrait of the tragicomic events that shape our everyday lives.

Winner of the Best Performer at Tiger Dublin Fringe Festival 2015 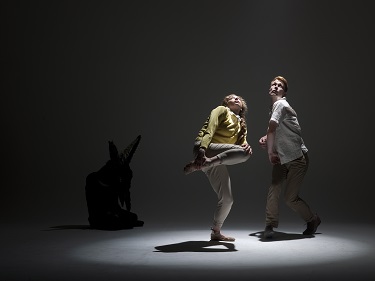 Exploring blindness and invisibility, Dusk Ahead shows the murky fading light of dusk when it is difficult to discern what is real and what is imagined. Dusk is the hour between dog and wolf, between domestic and wild.

The talented cast of international and Irish performers also act as the band, playing live music throughout the piece. The visual design incorporates hundreds of golden threads stretched across the stage, which are dimly and beautifully lit through carefully constructed lighting.

Dusk Ahead was presented at Dublin Theatre Festival and Kilkenny Arts Festival in 2013 to wide critical acclaim. It is touring to New York and venues throughout Ireland and Northern Ireland in 2015. 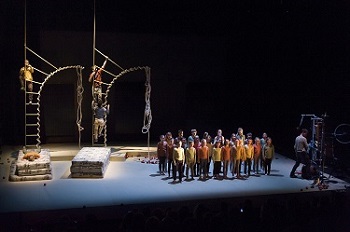 Witty dance theatre meets mythical chamber opera in The Falling Song. Male physicality is pushed to the extremities to explore self-destruction, invincibility and failure in this compelling production. Performed by an international all-male cast and a live children’s choir, The Falling Song looks at the nature of flying and falling and the dangerous relationship between the two.

The strength of this piece lies in the Kennedys’ considerable skill in allowing images, sounds and movement to sit side-by-side in their production without one element undermining or overwhelming the others.

Featuring an ambitious stage set, with towering ladders, stacked mattresses, mounds of apples and a local children’s choir, the performance investigates the simple metaphor of falling; falling in and out of love and falling from grace.

Click here to view the tech rider for The Falling Song. 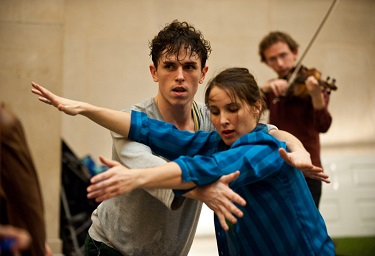 Sometimes We Break is a dance and sound promenade piece that explores incompleteness and ‘parts to a whole’. Leading the audience on a designed journey of movement and sound, the piece focuses on things that stop working, things that are interrupted and missing parts.

The piece creates different physical, visual and musical environments throughout the promenade performance. The company was interested in re-inventing the piece into a new space to highlight the shifting sense of belonging and the idea of ‘home’. The movement derives from the theme of being interrupted and the question of where the body is taken when it is between two places.

This sense of incompleteness is demonstrated in a section whereby the performers cut off certain movement before it can finish. In another section, toy soldiers demarcate the performers’ path forcing them to continually shift their physical sense of belonging. The space begins to exist fully when the performers inhabit it. By occupying the space, we make it our home. 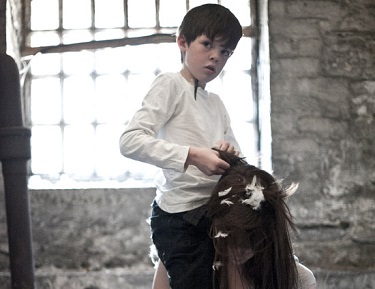 Bird with boy is a beautiful and fragile promenade piece by Junk Ensemble with Jo Timmins. Unravelling with fractured stories and littered with moving images and live music, this immersive dance installation concerns itself with things that end before they should.

The audience is lead from room to room, saturated with moving images and live music; fractured stories unravel and a quiet tension builds.

Bird with boy is performed by a cast of eleven; with two musicians, three dancers and six boys from Company B, Ireland’s only contemporary dance group for younger boys. 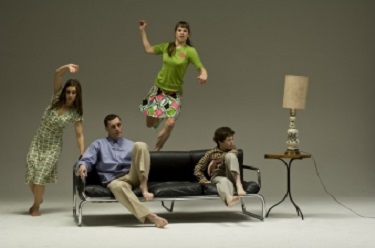 The living room is strewn on the front garden for all to see.

Five Ways to Drown looks into the interior of peoples’ lives and exposes the sadness, the absurdity and the banality through vignettes of dance and installation.

In this public display of the private, the choreography of everyday life becomes extraordinary. Continuing Junk Ensemble’s explorations of how spaces can be reinvented, the piece creates a different perspective on live performance.

Performed by three dancers, a young boy and an older woman, Five Ways to Drown shows us a picture of a family with the light going out: a little boy in a bath, a man wallpapering on a trampoline, a woman attached to an IV drip.

The movement is both violent and expressive with the dancers supporting each other in a climbing section; throwing a boy repeatedly into the grass; silently arguing on a sofa; spitting water and then dancing on a wet wooden floor.

Click here to view the tech rider for Five Ways to Drown. 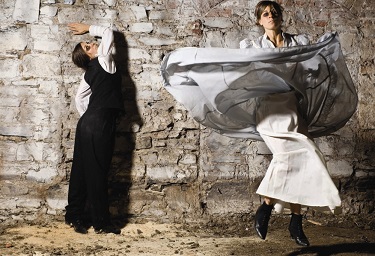 The piece is a collaboration between two highly acclaimed Dublin-based companies, Junk Ensemble and Brokentalkers, and is performed by two dancers, a small girl and an older man.

There are stories of a little girl on a tricycle, an older man with a birthday cake, secrets told through megaphones, separated audiences and compelling choreography.

Drinking Dust was awarded the Culture Ireland Touring Award 2008, nominated for an Audience Award at Dublin Fringe Festival 2008 and listed as an Irish Times Highlight of 2008.

Click here to view the tech rider for Drinking Dust. 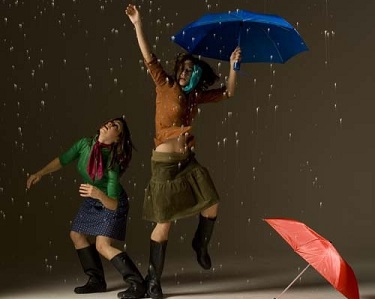 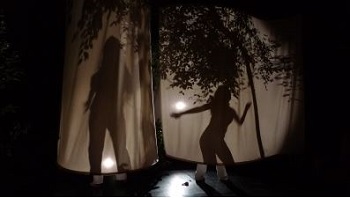 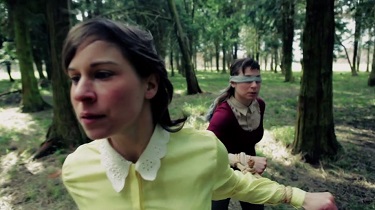 Hi there,  How are you doing today? We hope you and your family are staying safe and sane during these strange days. We've been thinking about how we stay connected. It's not easy. Some of us have to stay indoors all the time. Others mostly all of the time. We've had letters and postcards through our letterboxes that made us smile. We've got emotional sending messages of support and solidarity to others. Some of us have wifi, Social Media and laptops. Some of us don't. So, we're starting LOCKDOWN LETTERS. To try to stay connected to as many of our…