“Do we want to start a new organization devoted to political action?” asked Larry Kramer in March 1987 at the Lesbian and Gay Community Services Centre in New York. Two days later at the first ACT UP (AIDS Coalition to Unleash Power) meeting, almost three hundred people turned up in answer to his question.

Over time ACT UP chapters sprang up around the globe including Paris, San Francisco, Philadelphia, Boston, Los Angeles, London, Toulouse and Dublin. All chapters of ACT UP are all leaderless, consensus-based and what founder Larry Kramer termed “democratic to a fault”.

ACT UP fights against HIV stigma, pushes for accessible affordable treatment and prevention but also other health issues, broader inequalities, injustices that perpetuate HIV. ACT UP Dublin like other chapters is “a diverse, non-partisan group of individuals united in anger and committed to direct action to end the HIV crisis”.

The Dublin chapter was first formed in 1990 but it was only active for a few years until it reformed in 2016. In its first guise ACT UP Dublin, or Dublin ACT UP as it was then known, hit the ground running with an action every month for thirteen months including occupying offices in the Department of Health. Three of the ACT UP Dublin members, Izzy Kamikaze, Barry Quirke and Eoin Freeney went on to start the reformed Dublin Pride Parade in 1992 which had ground to a halt in 1986 although Pride week had continued throughout.

Due to other commitments by its members, the first iteration of ACT UP Dublin ended long before anti-retroviral treatments became available in 1996. In July 2016 ACT UP Dublin reformed in response to the increasing HIV diagnoses in Ireland which had started to rise on the back of sexual health services cutbacks after the economic crash of 2008. HIV continued to be a political issue and one of the first major actions was a protest in front of the Department of Health (then at Hawkins House) in the run-up to World AIDS Day 2016 featuring a giant green ticking alarm clock “to wake Ireland’s dormant institutions to the need for a renewed effort to address the expanding (HIV) epidemic.”

ACT UP Dublin is currently keeping a focus on people living with HIV, HIV stigma, the full return of sexual health clinics, the continuing and expansion of the PrEP programme and peer support for those living with HIV.

To find out more go to actupdublin.com 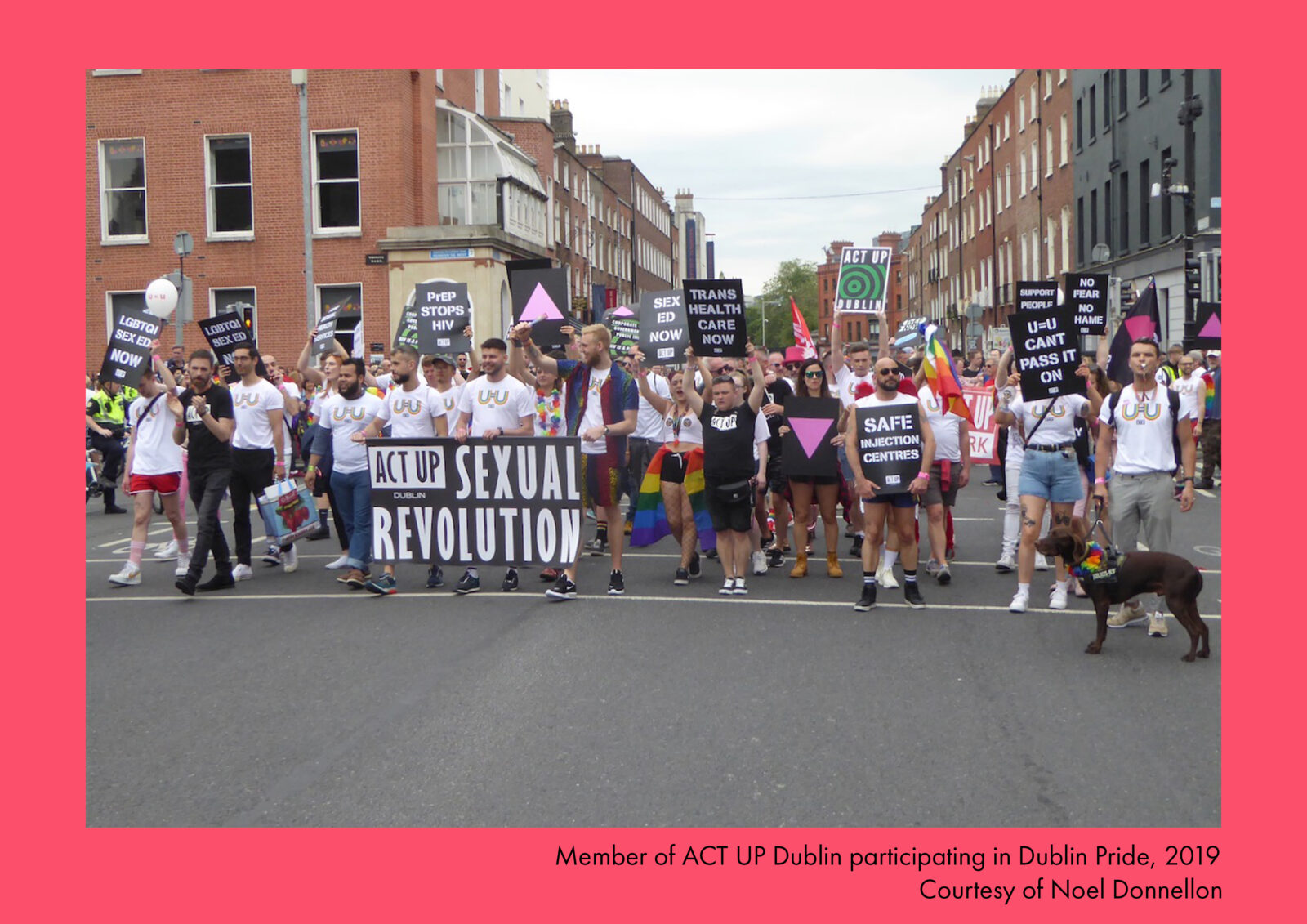