Active Archive – Slow Institution is an extensive research initiative that delves into Project’s 50+year history, looking at the imagined futures and proposals for transformation recorded in Project Arts Centre’s archives.

In late 2018 the Project gallery was transformed into a workspace where documents relating to Project Arts Centre’s archives were studied and shared, and the many histories that are entangled in one of the earliest arts centres established in Ireland began to emerge through documents that are part public record and part privately collected materials.

Organised into three chapters, the first is titled The Long Goodbye featuring new commissions by artists that revisit documentation from their own archives, such as film and video material of the former Project Arts Centre building at East Essex Street by Brian Hand and field recordings made in Dublin by Fergus Kelly.

Miriam O’Connor has photographed the former addresses where Project Arts Centre operated before moving to East Essex Street and the sites where programming continued while the current building was being constructed. Special display structures have been designed and made by Tanad Williams. The timeline includes selections from the thematic archival researches of Dorothy Hunter and Hannah Tiernan.

The Long Goodbye focuses on the late 1990s as this marks a turning point in Project’s operational model and the finalization of the decade-long negotiations to provide Project Arts Centre with its current building. Significant events during that period include Demolishing Project – 39 East Essex Street is Closed, the two-week festival-like farewell to Project’s old building between 3 and 14 February 1998, orchestrated by the late Maurice O’Connell, then artist in residence, and the programming that continued until 1999 during the construction of the Project Arts Centre’s new building. This comprised the project@the mint theatre and live art programme and the OFF Site visual arts programme produced at various city locations.

Valerie Connor, curator of the OFF Site visual arts programme in 1998 and 1999, has selected and prepared photographs that she took during research and production visits for the 10 projects comprising that programme and for the first time, she will present these together with new writing about the experiment that was at the heart of the visual arts programming that ran while Project Arts Centre was in-between buildings.

Through the interrogation of documents and archival artefacts from the perspective of pressing contemporary issues, we can re-evaluate the status of exhibitions and the role of public institutions in relation to the changing conditions of artistic labour and production. This is the first chapter in a longer conversation to critically reflect on the development of Temple Bar, gender and class representation, the history of Irish feminism, and LGBTQ rights. We invite all groups and individuals to read and look at our archive materials together.

This piece by Fergus Kelly, commissioned specially for ‘Active Archive – Slow Institution – The Long Goodbye’, has been woven from field recordings, radio recordings, answering machine messages and concert recordings made in the 1990s, and also includes some TV and music from the time. The field recordings were originally made for Fergus’ CD album for Project Arts Centre’s Invisible City (1999), as part of the ‘Off Site’ series of exhibitions during building renovations.

OFF Site visual arts programme, 1998-1999
The OFF Site visual arts programme ran for two years, in 1998 and 1998, while the current Project Arts Centre building was under construction. The artists who presented new work commissioned for the OFF Site programme were Tony Patrickson, Dorothy Cross, Pete Smithson, Sandra Johnston and work-seth/tallentire (all in 1998) and Paddy Jolley (now deceased), Tina O’Connell, Fergus Kelly, Ronan McCrea and Daniel Jewesbury (all in 1999). The OFF Site programme took place at locations around Dublin with the exception of Dorothy Cross, whose project took place in Salthill, Galway and Tony Patrickson, who made an interactive CD-Rom, Fergus Kelly, who made a CD, however these were launched in Dublin at city centre venue 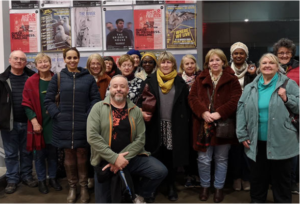 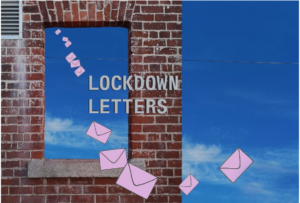 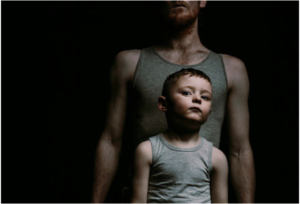 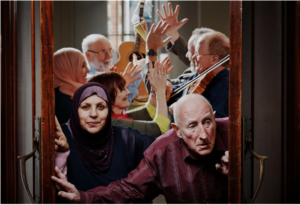 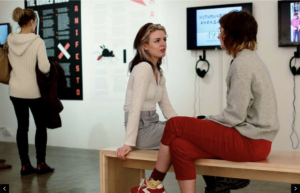 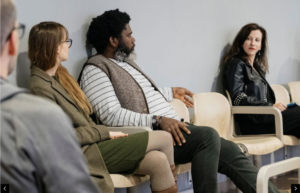 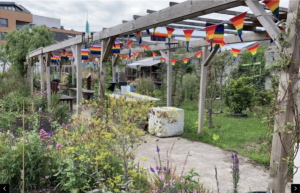 Valerie Connor, independent curator and contributor to ’The Long Goodbye,’ curated the OFF Site visual arts programme in 1998-1999. Valerie is now an independent curator and educator. She writes and speaks about art and culture, and works with different kinds of commissioners to devise and deliver projects and programmes. She lectures on the BA Photography programme at Dublin Technological University’s City Campus in Grangegorman, Dublin. Valerie was the Visual Arts Director at Project Arts Centre 1998 – 2001.

Brian Hand’s art practice is broadly concerned with creatively exploring and researching events, spaces, agents, and ideas from the past. Hand has made many temporary public works and time-based installations, and often in site-responsive ways. He believes that we can find alternative images in the past that disrupt the naturalness of the present. Hand has worked on several collaborative projects with Orla Ryan.

Dorothy Hunter is an artist and writer based in Belfast who works with the parallax of histories, information access and alternative and incidental archives. She is a recent graduate of NCAD’s MA Art in the Contemporary World and a current student at the Dutch Art Institute (DAI).

Fergus Kelly is an artist from Dublin working with field recording, soundscape composition, invented instruments and improvisation. He has shown nationally and internationally and received many Arts Council awards. In 2005, Kelly established a CDR label and website, ‘Room Temperature’, as an outlet for his solo and collaborative work, producing the CDs Unmoor (2005), Material Evidence (2006), Bevel (2006) (with David Lacey), A Host Of Particulars (2007), Strange Weather (2007), Leaching The Pith (2008), Swarf (2009), Fugitive Pitch (2009), Long Range (2010), Unnatural Actuality (2014), Quiet Forage (2015) (with David Lacey) and Trembling Embers (2018). Albums on other labels include A Congregation Of Vapours (Farpoint 2012), Neural Atlas (Stolen Mirror 2016), Shot To Shreds (Farpoint 2016), Local Knowledge (Unfathomless 2017), The Map Is Not The Territory (with Max Eastley & Mark Wastell) (Confront 2019).

Miriam O’Connor is a Cork-based photographer and educator. Drawing inspiration from the language and sights and sounds of the everyday, her photographic practice engages with matters which reflect her everyday surroundings and contemplates the manner in which this persuasive medium permeates the way we engage with the world around us. Rather than providing answers, O’Connor positions photography as a tool for posing questions, a medium in itself that commands interrogation. She enjoys the special ambiguity of still images and photography’s capacity to conceal as much as it reveals. Her projects have explored: themes around looking and seeing; the relationship between camera and subject; the circulation and consumption of images; and the complex nature of photographic representation. Her work has been featured in publications including; Camera Austria, Source Photographic Review, The New York Times and The Guardian. Recent exhibits include: ‘Family of No Man’, COSMOS, Arles (2018); ‘Interiors and Other Landscapes’, Sternview Gallery, Cork (2018); ‘RHA Annual Open’, Dublin, (2018); ‘Encountering The Land’, VISUAL, Carlow (2018). Publications include: Attention Seekers (2012); The Legacy Project (2013); and Tomorrow is Sunday (2017). O Connor’s work has recently been selected for FUTURES, a photography platform that pools the resources and talent programmes of leading photography institutions across Europe in order to increase visibility of its selected artists. In addition to her art practice, O’Connor also lectures at Griffith College Dublin.

Hannah Tiernan is a visual artist/researcher with a background in photography and sculpture. Her 2016 photographic project, EQUAL, won the Inspirational Arts Award. She is currently studying for an MFA in Art in the Contemporary World through NCAD. Her work primarily focuses on queer issues. Her current thesis research looks at the LGBTQ+ theatre of Project Arts Centre from 1976 to 2000, investigating how it has influenced contemporary theatre practice and how it has reflected social issues of the time.

Tanad Williams a visual artist living and working in Dublin, and graduated in 2012 from the Sculpture Department in NCAD. He works with a variety of mediums on research-based, large-scale and often permanent or semi-permanent works. Williams’ work focuses on human interaction within a landscape, built environment or within a system of language. Taking the form of an intervention or large object, the works are built to a human ratio or domestically familiar architectural size. An intensive amount of study and preparation is required for the production of each piece. Paul Ricoeur, Jacques Derrida and Ray Brassier inform and are pivotal to the practice of producing philosophically engaged architectural interventions, objects or dialogues. The work often takes the form of an epistemologically challenging sentence, fabricated object or situation. Growing up bilingual, Williams has an interest in languages and their structural form and utility ascribed and rewritten over time. Deeply rooted in academic research and linguistic investigation, his practice works toward a final object that is constructed to represent both its material reality and its theoretical conception. The work often presents abstract elements and theories as entry points for the audiences who interact with the objects. Whether a complex architecturally remodeled space, or a simplistic work of art, these deliberate alterations allow the audience to see new functions and potential dynamics emerge from the presented space or artwork.

Project Arts Centre is proud to be supported by the Arts Council of Ireland and Dublin City Council.
Tanad Williams was supported by Bracken Foam.

Lívia Páldi: Active Archive - Slow Institution: The Long Goodbye Some Points of Departure The Active Archive – Slow Institution project makes an attempt to temporarily rehabilitate the ‘absent’ archive in the gallery and transform it into a place for questioning, hesitation, suspension and refueling. ‘The Long Goodbye’ (a changing installation of timeline documents, moving image, sound and photographic works) frames the continuing enquiry.

Valerie Connor: Slow Burn My contribution to The Long Goodbye aims to describe our experiment to re-imagine what makes an arts centre. From a curatorial standpoint, my perspective is grounded in my experience of programming at Project Arts Centre through the era nicknamed the Celtic Tiger and from the viewpoint of having now worked in the arts through the austerity that followed the banking collapse and economic crisis of the late 2000s and its ongoing effects.

Valerie Connor: How sweet it is to murmur together Valerie Connor outlines the Off Site programme (1998-1999) she curated for Projects Arts Centre. The Visual Artists’ News Sheet, May - June 2019

Demolishing Project - 39 East Essex Street is Closed, 1998 This two-week event marked and celebrated the re-development of project @temple bar. It was the final event before the reconstruction of the site, and comprised a fortnight of activity, signposting the importance of 39 East Essex Street in housing much of the work Project had done and continued to do.

Miriam O'Connor: Where To Begin - Mapping Isla Blue, 2021 Isla Blue was commissioned for The Long Goodbye and devised by Valerie Connor. Artist Miriam O’Connor photographed the former sites where Project’s various Dublin-based Off Site programming took place. For this PDF, O’Connor has put together a selection of these images she made for the ‘Folios’ exhibited at Project, with notes and reflections on her process of researching and making the photo- graphic series Isla Blue.